Four Sawbills and a Muntjac

With my fourteen week London marathon training plan now in full swing and less than a hundred days until the big day (gulp!) I have a commitment to run four times a week (if the old pins can take it!), so the opportunity to go birding has diminished somewhat but I always knew this would be the sacrifice I ultimately had to make, especially if I am to achieve my goal of completing the course. However, I still managed to get out on Saturday morning as I also have another commitment to meet with the BTO and their monthly WeBS count. Gunpowder Park in the Lee Valley was my first stop and arriving at first light, I was greeted out of the gloom by a timid Muntjac Deer circling the fringes of the small woodland lake, but as soon as he got a sniff of me he was off and disappeared back into the woods. 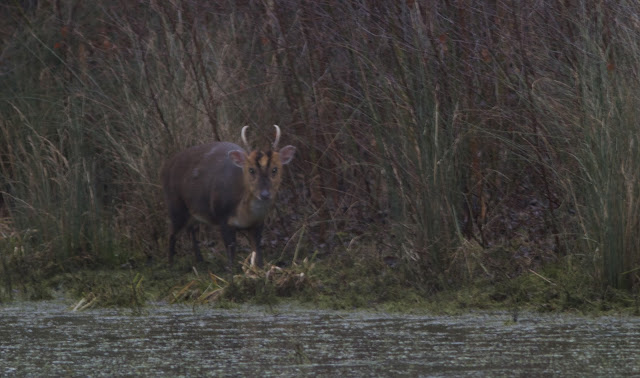 The site at Gunpowder Park doesn't herald very much in terms of species and numbers of Wildfowl other than the usual dabbling ducks with Teal being the most numerous through the winter months, so I was pleasantly surprised when I picked up four Goosander on the River Lee. These birds were quite edgy and each time I moved closer with the camera they happily moved further along the river! Therefore I only managed a couple of distant record shots for my efforts. Technically the River Lee is not part of my WeBS count area, so unfortunately these birds don't count as part of my monthly survey.

With an easterly cold front approaching and winter finally arriving (hooray) well, that's according to our expert meteorologists, the UK is in for a much overdue cold snap which could possibly last for over a week - and not before time. I think we are all bored of this wet and mild tropical weather - give me a good old fashioned British winter, I want to see snow blizzards, icicles, sub-zero temperatures, a biting wind, frozen fingers and toes, dead batteries and kids with matching scarfs and bobble hats, all rosy cheeked with runny noses - bring it on! This icy blast will hopefully encourage many more of these Sawbills and their closely related cousins onto our inland rivers and lakes, providing better photographic opportunities and maybe a bonus point or two for many a patch-worker in the near future. 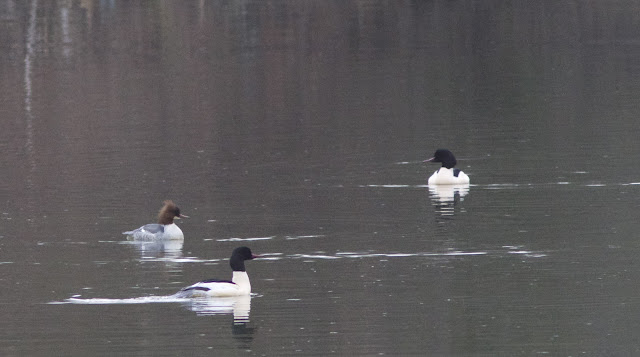 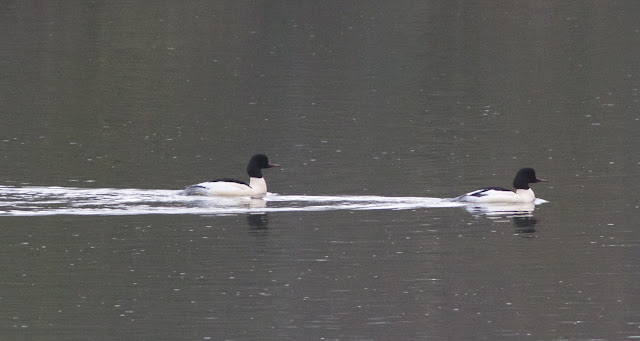 Finding myself with a couple hours spare in the afternoon (thanks to a kids party) I headed in the direction of Wanstead Park in search of much needed patch year ticks but disappointingly only managed to add Little Grebe and Wigeon (thanks to JL) so the list currently stands at a derisory 53 - oh well, at least I have a reasonable excuse - I'm busy until the 21st April!