My London marathon 'Race Day' and a final thanks

The day of the London marathon had finally arrived, I didn't have the best nights sleep but then I hadn't slept well all week - nerves, excitement, worry! All three of those were contributing factors.

Awake early, the weather forecast looked good, a light wind, dry and bright, with temperatures rising to 16 degrees - I only hope this wasn't going to be too warm! I'd eaten my pre-race breakfast of porridge and a banana, made a peanut butter bagel to eat en-route, drank my last hydration drink, put on my running gear with race number firmly pinned to the vest and I was off to catch the tube and the Docklands Light Railway to Greenwich and the world famous start line in the park. Saying goodbye to Mrs B and my two boys at the tube station I felt the first wave of emotion as I knew the next time I saw them would be during the race.

On a busy DLR train packed with nervous looking fellow runners we passed the Olympic stadium only adding to the buzz of excitement, bringing back fond memories of the athletes who had giving their all to be a part of an amazing event last summer - for once in my life I could almost relate to their story having also given it my best to be at my fittest to tackle the physical demands of a marathon. 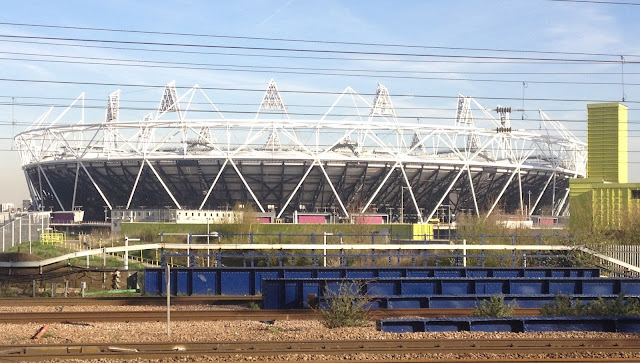 The clock was ticking closer to 10am as 40,000 runners lined up in their allotted positions ready for the mass start, before that though in honour of the three people who died in the Boston marathon only six days earlier, a 30-second silence was impeccably witnessed only further adding to the emotion on the start line, my stomach was like a knot and I had so many questions flying around my head - "am I fit enough?", "will the calf hold out?", "will it be too hot?", "am I fully hydrated?", "how fast should I start?", "are these the right socks?", "will I finish?" And then the hooter sounded - we're off, well not exactly with 40,000 runners in the race it took me over ten minutes to cross the start line but eventually I did and broke into a gentle jog with 26 miles and 385 yards ahead of me.

Part of the my anxiety before the race was whether I could complete the course with a tight/bruised calf! I hadn't let on to many people but I had taken an innocent kick to the calf on the Tuesday before whilst playing football in the garden with my boys and one of their school friends. Although not serious, I had precautionary not run on it since as the race was too close, and any thoughts of not taking part through injury was just too painful to think about. As I took my first few strides I could feel the calf tighten - bollocks, not sixteen weeks training down the pan and with all those donations to my charity, this couldn't be happening! But as I pushed on, ignoring the pain the calf seem to relax and the pain eased and became bearable to run on - had it been all in my mind, was this just self-induced tension? Who cares, I was running the London marathon for probably the only time in my life, pain or no pain I was going to finish this.

Catching only a fleeting glimpse of Mrs B at the six mile marker was just the early support I needed, a combination of good weather and the 'Boston' effect had swelled the support along the route and I could only manage a brief wave to my family as I pushed on at a good pace. The first 13 miles seemed to fly by and keeping an eye on the clock I was through the half way point and over Tower Bridge in around two hours - could I keep this pace up and dip under the mythical 4 hours?

Running towards the Isle of Dogs and Docklands between miles 15 and 20 seemed to take an age as my pace started to slow, the sun shone and the temperature climbed, the next water station couldn't come too soon, grabbing a couple of jelly babies from a spectator in the crowd was just the boost I needed. The calf was holding up well but as I slowly ticked off the mile markers, other parts of my body were starting to hurt - I could feel the blisters swelling on my feet, my hips were beginning to ache and my legs starting to cramp - had I set off too fast? Was I going to pay for it in the later stages? A pre-arranged meeting point with my family and friends in Canary Wharf was just the tonic I needed, lifting my spirits, especially when I saw the home-made signs with my name on waving in the crowd - I knew that if I stopped I may not get going again, so I just grabbed the briefest of kisses from Mrs B, waved to my two boys and friends and continued my steady assault towards the finish.

Going past the 20 mile marker I knew I had it in me to finish, the sub 4 hours was now out the equation but the day wasn't just about the time, it was all about finishing - although I can't lie, I did have an eye on 4:18 - the time Mrs B recorded some 10 years ago. I almost missed the cheering support at around 23 miles from my charity and the team 'Starfish' crew, screaming my name - I could barely hear them over the noise coming from the other spectators but by now I was in the zone, focusing on finishing, I'd almost blocked out the continuous wall of sound from all the cheering supporters lining the route, my body ached, my heart was pounding and my head was thudding but my goal continued to edge closer. 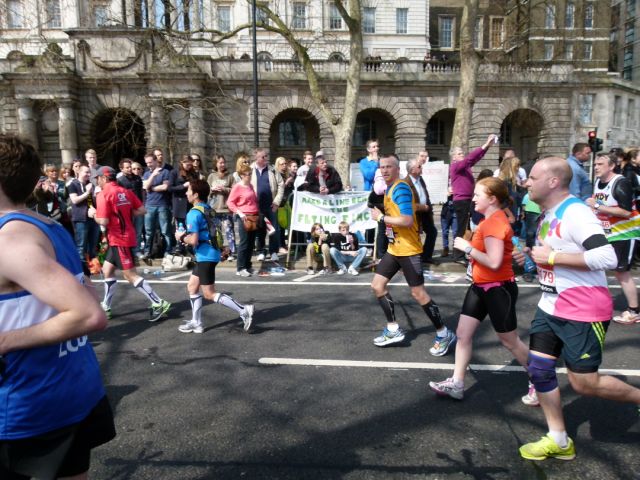 Finally the 26 mile marker was now in sight as I ran along Birdcage Walk then turning into Mall I could see the final meter makers, 800m, 600m, 400m, 200m and the finishing straight - I'd dreamt about running hard and fast towards the finishing line but by now I had given my all to get this far and as much as I tried the legs were finished, and so was I, as I crossed the line, arms aloft I had done it - 4 hours, 15 minutes and 36 seconds.

The body ached and I could hardly walk as I collected my medal but I was proud and smiling, knowing that I had achieved my goal. 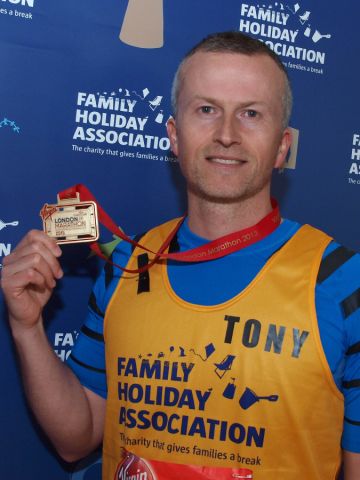 There are many people I would like to thank from everyone who turned out on the day and shouted my name and willed me on as I passed them en-route - a massive thanks to you all. The wonderful people who made more than generous donations to my charity 'The Family Holiday Association', to date I've raised £1,757 and including gift aid this figure is over £2,000 and as part of a team of runners under the banner of 'Team Starfish' we have raised a combined total approaching £40,000 for this much deserving charity. A special thanks goes to my mum who championed my cause and helped push up my off-line donations by badgering all her friends, neighbours and members of her Bowls club.

And finally the biggest thanks goes to the three most important people in my life - my two young boys who cheered me on on the day and came to watch me on my winter training runs, I hope this inspires them one day to take on the challenge of a marathon, and lastly my amazing wife without whose encouragement I might have taken a different route and pulled out through injury - your love, support and understanding throughout my long marathon journey made all the difference on the day.