Short-toed Eagle - by the skin of my teeth

A great set of images courtesy of Nick Croft, but where might you ask are my photographs of this simply amazing Snake Eagle?

Well to be honest I was lucky to even see the bird. 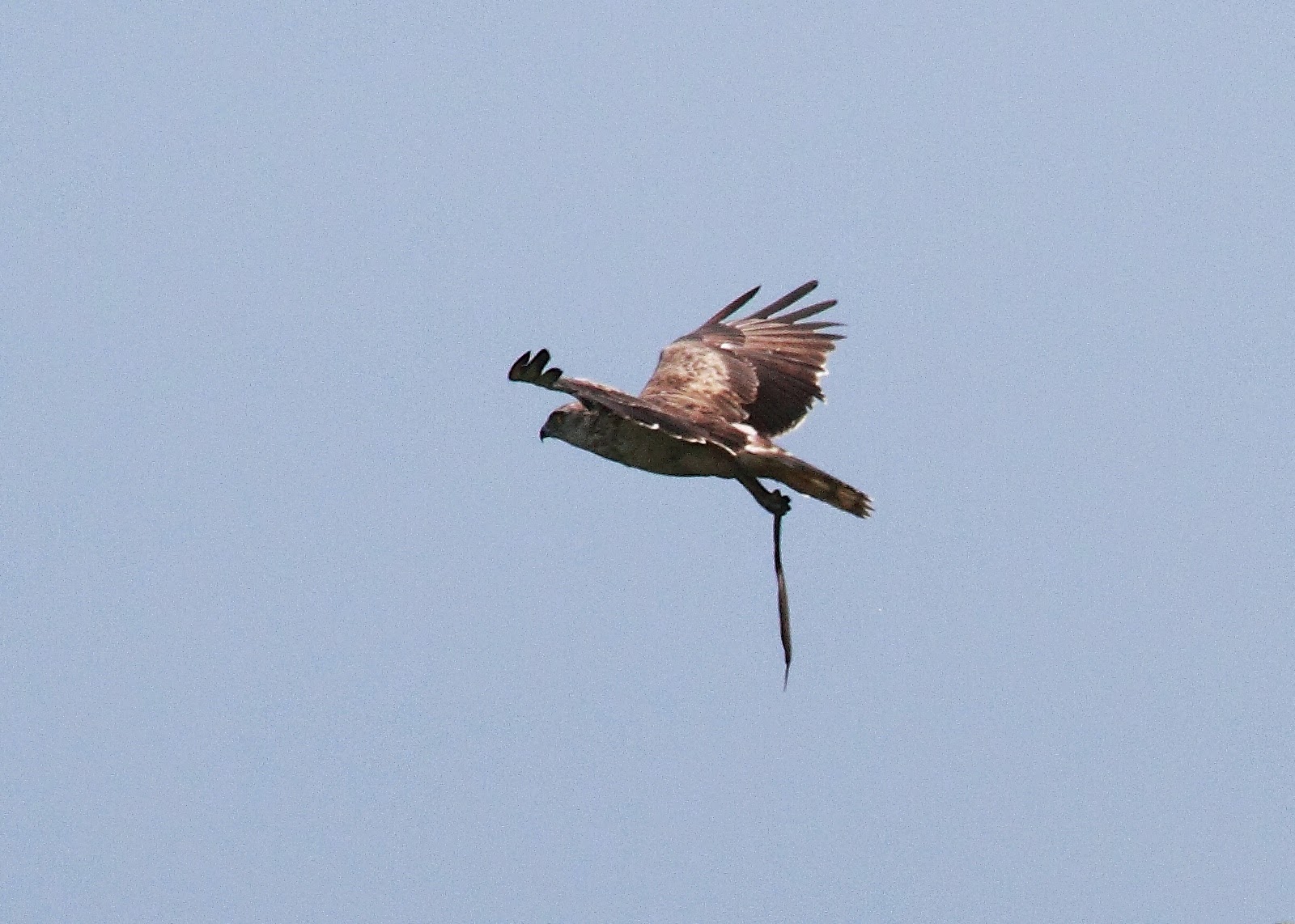 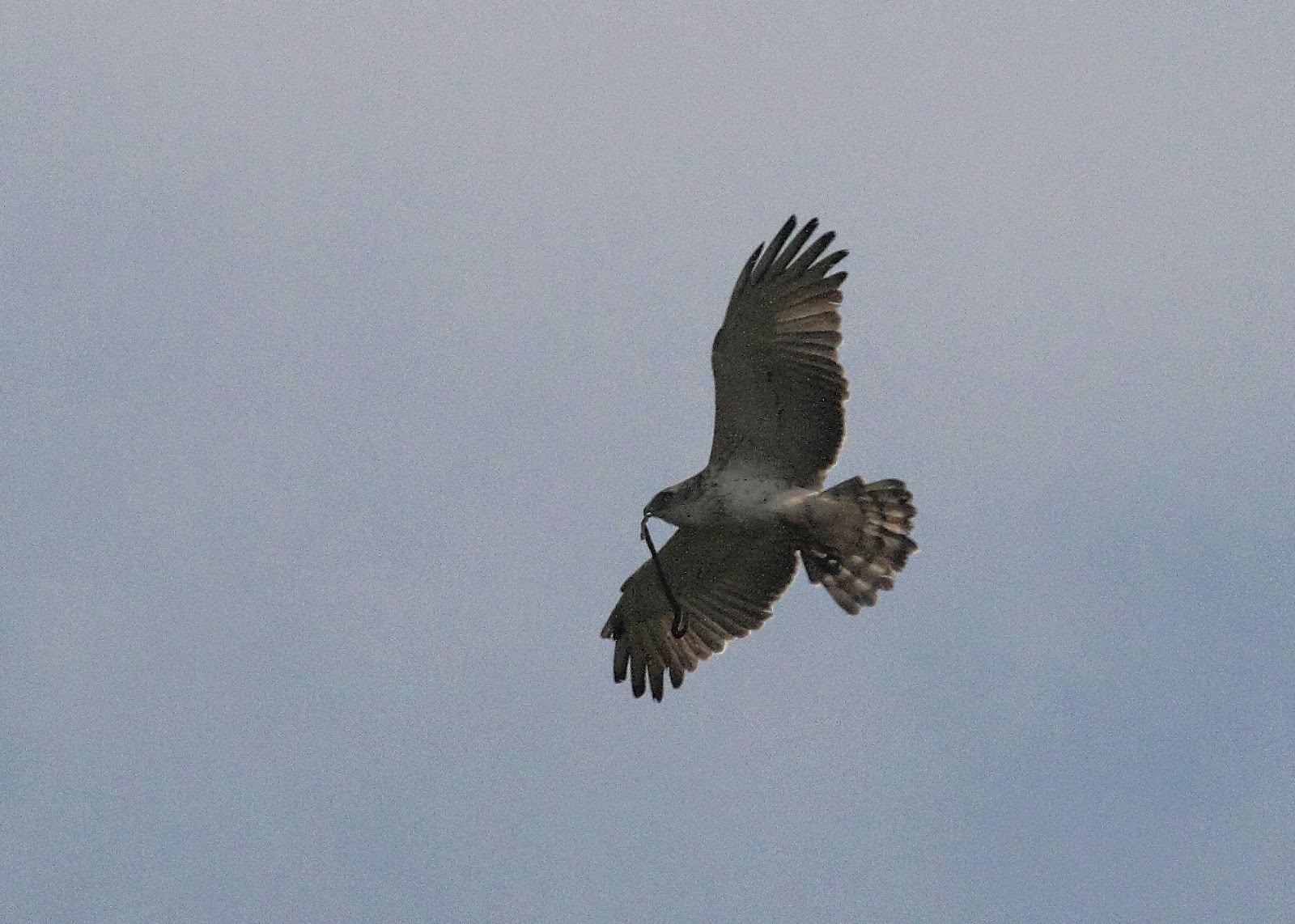 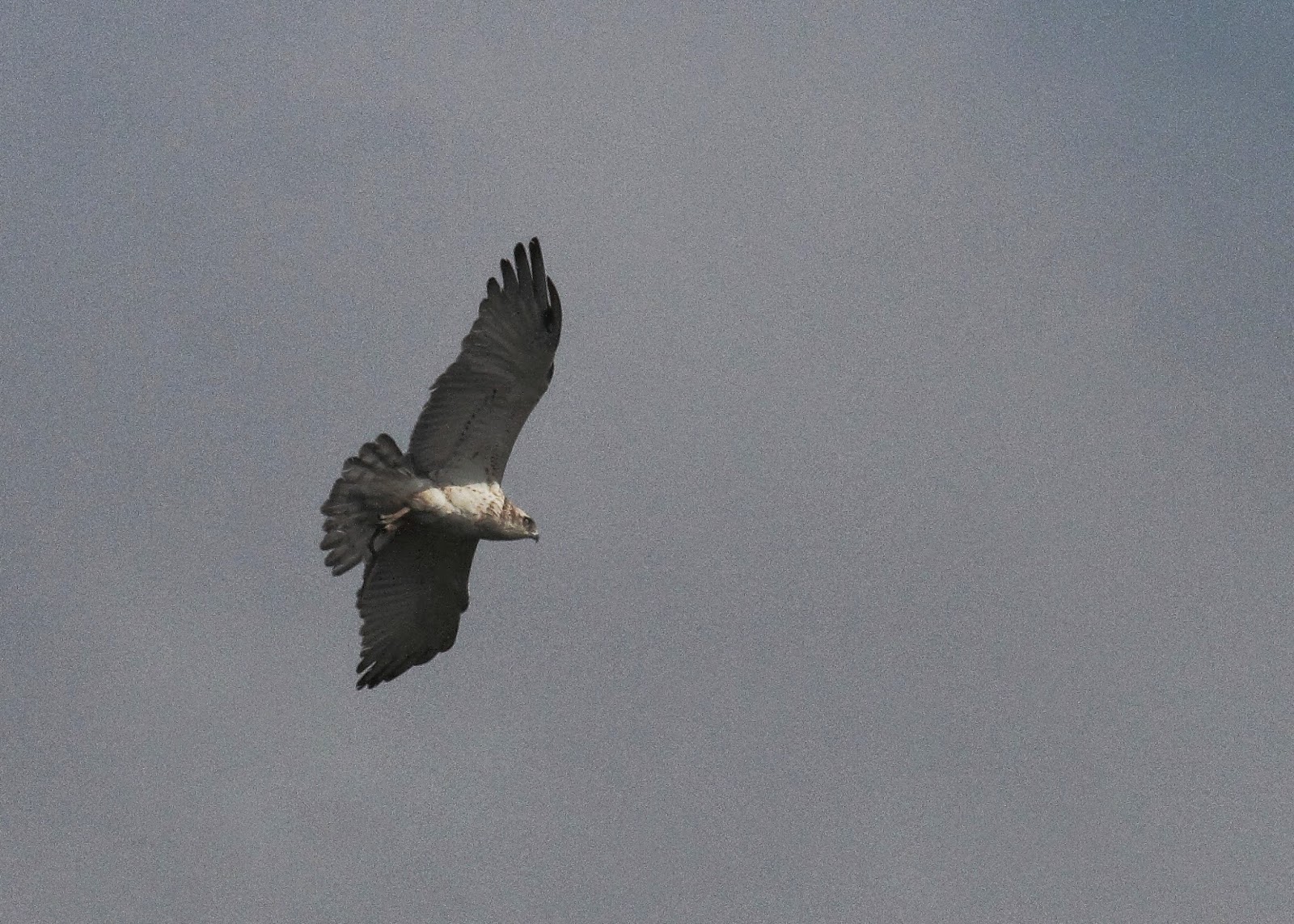 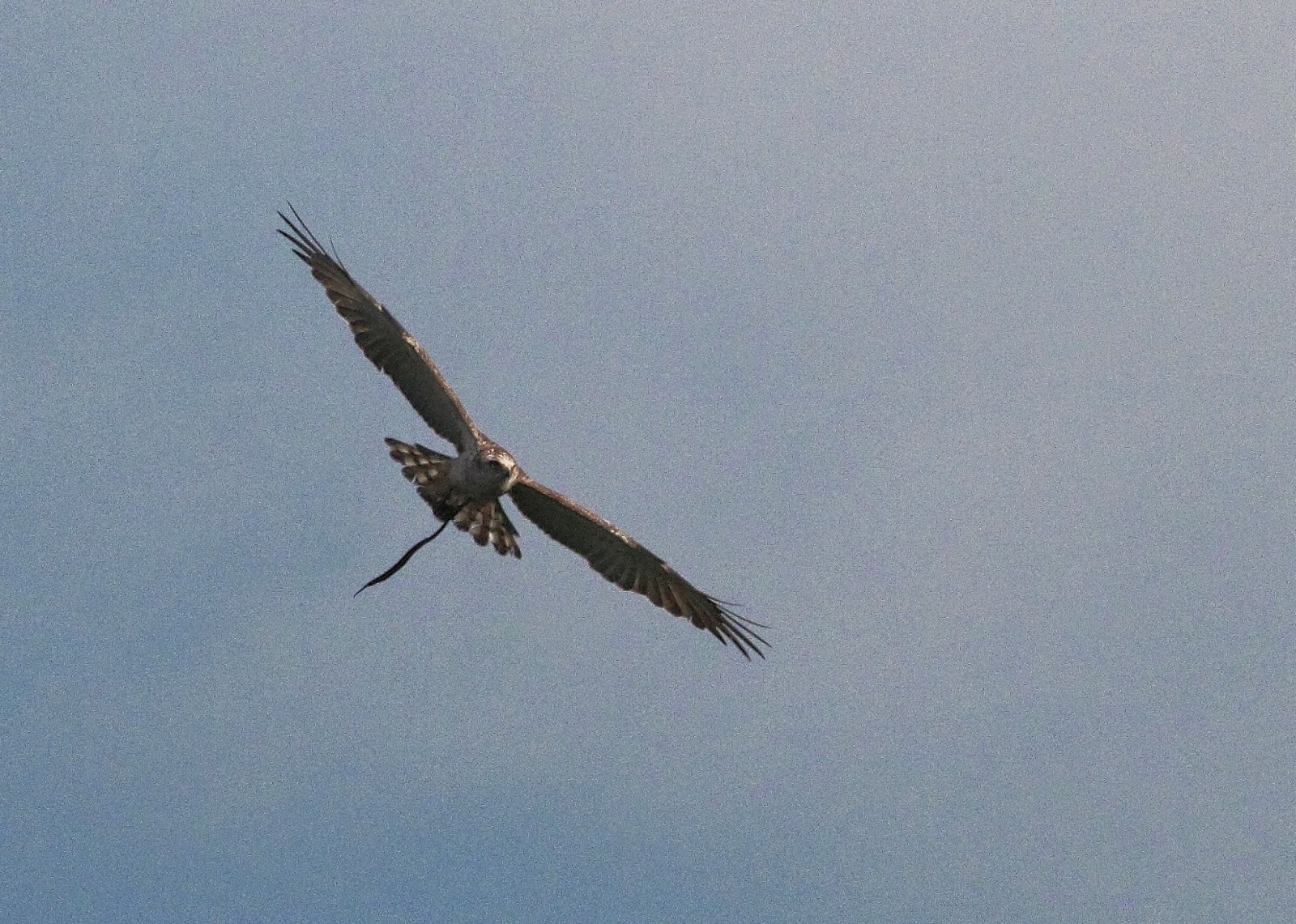 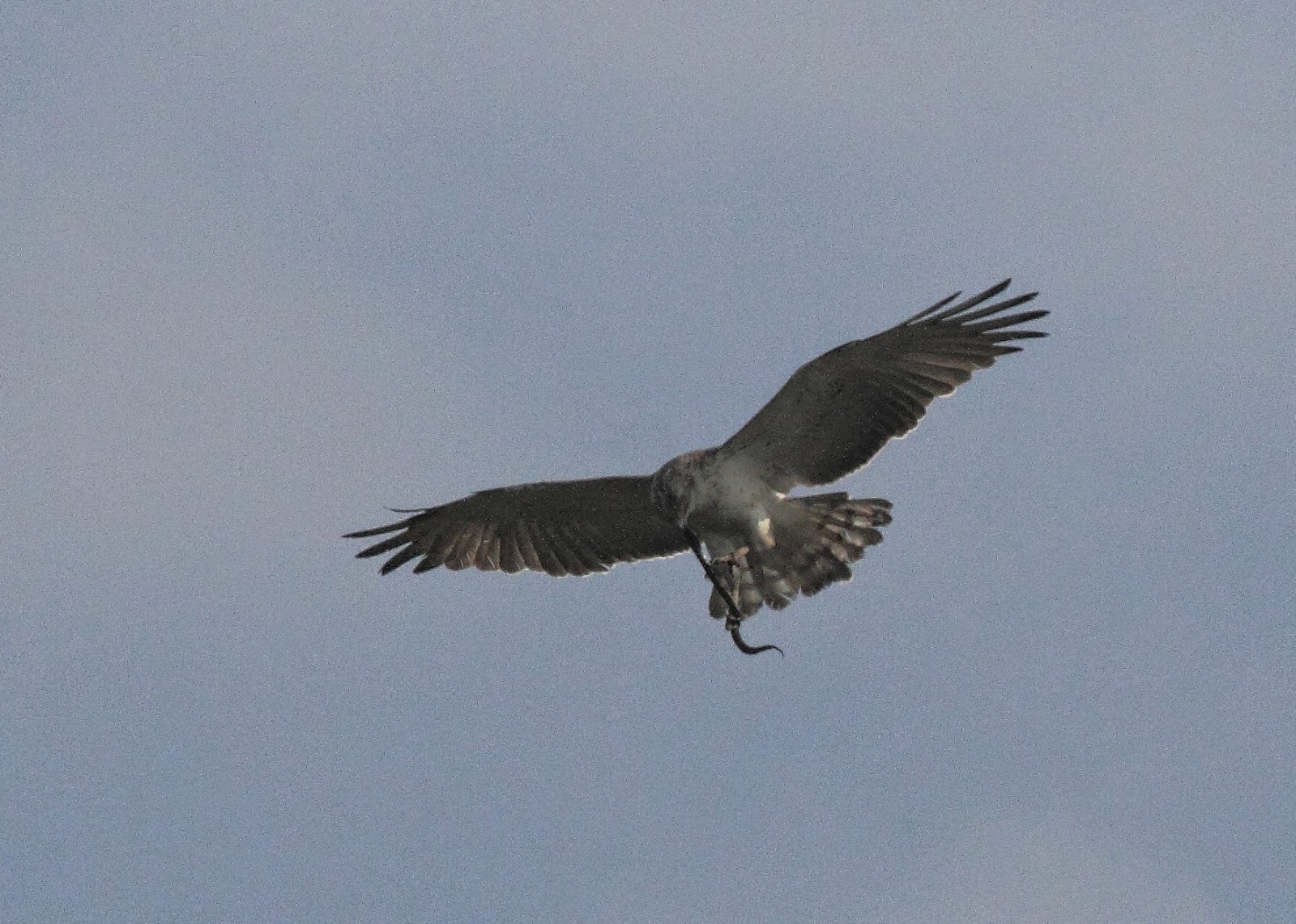 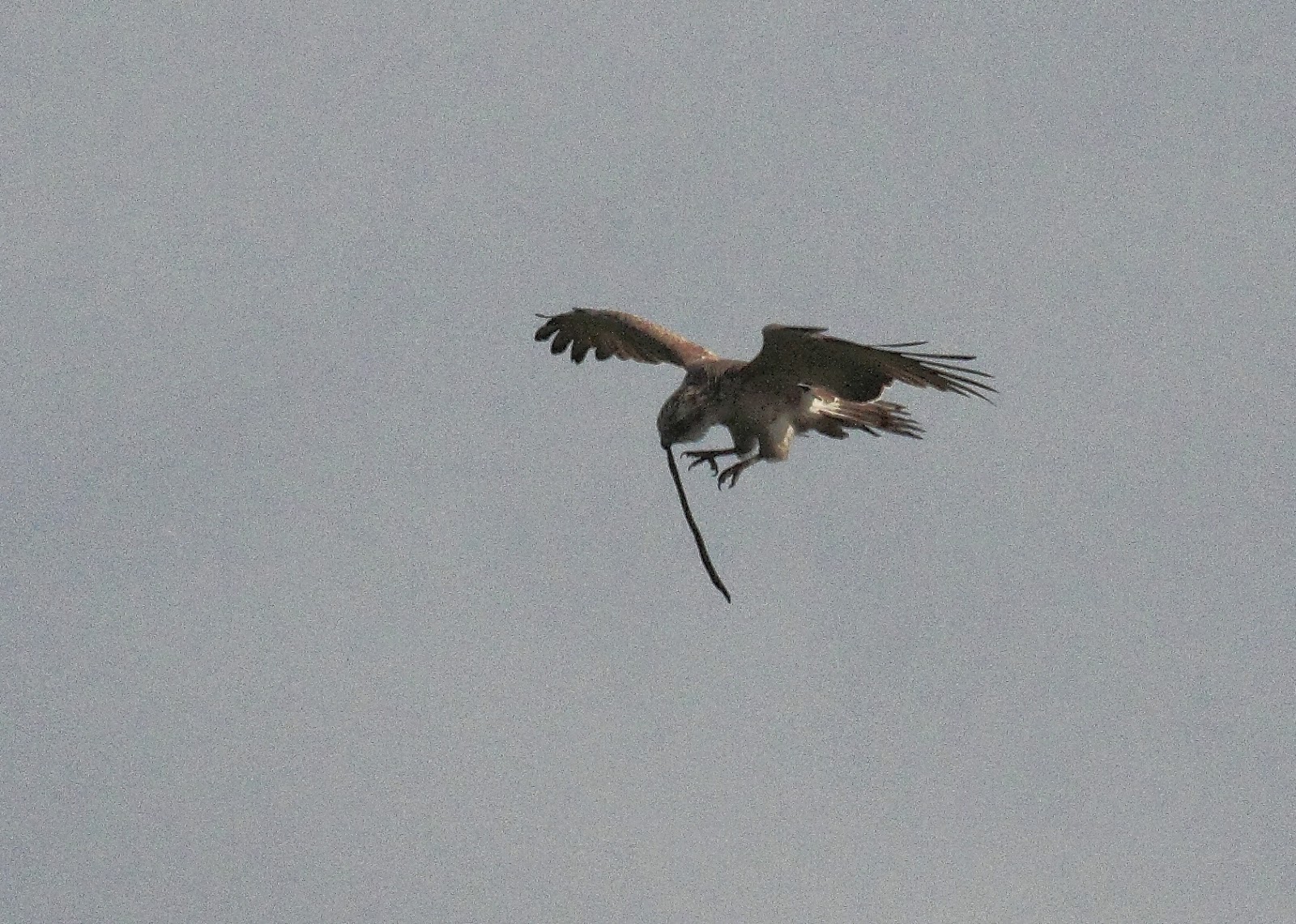 With yet another busy weekend already planned I had a small window of opportunity on Saturday morning to drive to East Sussex and be back home again for 9.30am (parental duties called). The alarm went off at 3.30am and I was on site and parked at Gills Lap car park at 5.00am, a dozen or so cars were already there and a small line of birders were in position with scopes aimed in the direction of valley clearing below in Ashdown Forest.

I'm not always the biggest fan of twitching, especially when this means impatiently standing in one place and waiting with a group of mostly middle-aged men politely making small talk, so I was pleased to see a familiar face in the form of Stuart Fisher who had made the journey south through the night on both foot and public transport with Nick Croft. From our raised vantage point the three of us stood, waited and watched the horizon, as the minutes ticked away, a Turtle Dove called, several Stonechats passed by, and a distant Common Redstart kept us entertained but still no sign of the Eagle - I continued to play it cool but knew I had to realistically leave site by 8.00am to be safely home for my 9.30am deadline.

As the sun gained height in the sky I continued to clock watch and at 7.55am with no sign of the bird I reluctantly said my goodbyes and made the short walk back to the car park - feeling somewhat disappointed but ultimately thinking about when could I next return for another go. I had just reached the car when the silence was broken with the sweet sound of "there it is!" The number of cars and people had significantly swelled since I first arrived, so I hastened towards the nearest birder and interrupted him with "Can I have a quick look through your scope?" - and there it was sat in the top of a pine tree. I quickly extended the legs on my tripod and found the bird in my scope, I enjoyed a further five minutes of views, phoned Nick to ensure they too were on it and left site just after 8.00am and I was back home by 9.25am - job done.

I was pleased and a little relieved to have seen the bird, but only wished I had had more time to enjoy the experience of witnessing a hunting Short-toed Eagle in the UK - If it does stick around I'm sure I'll go back for a slightly longer look next time.

Isle of Skye - Landscapes and Birds

Just a few images of the wonderful scenery from the Isle of Skye, as the photos show we had no complaints about the weather - mostly calm, dry with long sunny days. If we had returned on the same week every year for tens years we wouldn't have had better weather - lucky I suppose, but a real bonus, enabling us to fully explore the island.


Apart from the Seabirds and Eagles (see previous posts) here are a few of the better photographs of some of the birds I had during our week, to be honest the birds were slightly harder to come by than I had expected. Both Cuckoo and Willow Warbler were the exception and seemed to be calling/singing all over the island - a positive sign, as both these birds continue to struggle for numbers south of the border. Summer plumaged Red-throated Divers were on a couple of the lochs but always showing distantly, Arctic Tern and Red-breasted Merganser were seen around the coast, Common Buzzard, Wheatear, Stonechat and Curlew over the moorland, but sadly no sign of any Hen harrier or Short-eared Owl, and as for Corncrake the closest I came to one of those was a bottle of the ale brewed by the Orkney Brewery - none the less a great trip and you always need a good reason to return. In an incredible setting on the banks of Loch Harport stands one of Scotland's and possibly the worlds finest Whisky distilleries - Talisker, and very nice it was too - I even purchased a wee dram for myself and a pair of souvenir rocking glasses - what a tourist!

But what I found even more incredible was the sight of dozens, probably hundreds of Moon Jellyfish of various sizes (but never bigger than a dinner plate) drifting along the Loch. 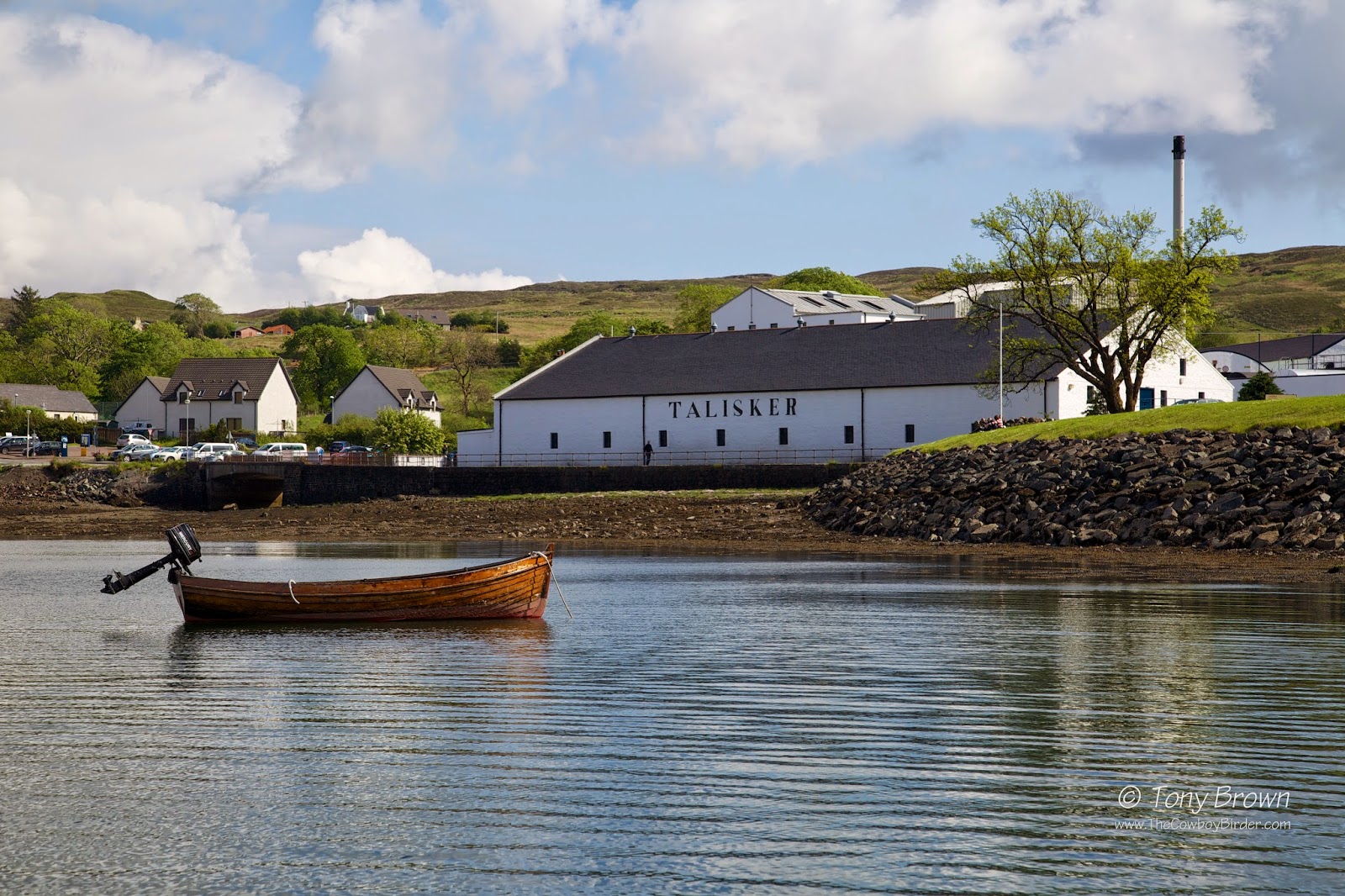 A short walk from the distillery is a small jetty - which was not only a great photo opportunity for the distillery (photo dosen't do it justice) but also a great vantage point for witnessing the migration (I'm guessing they migrate) of these amazing marine animals. 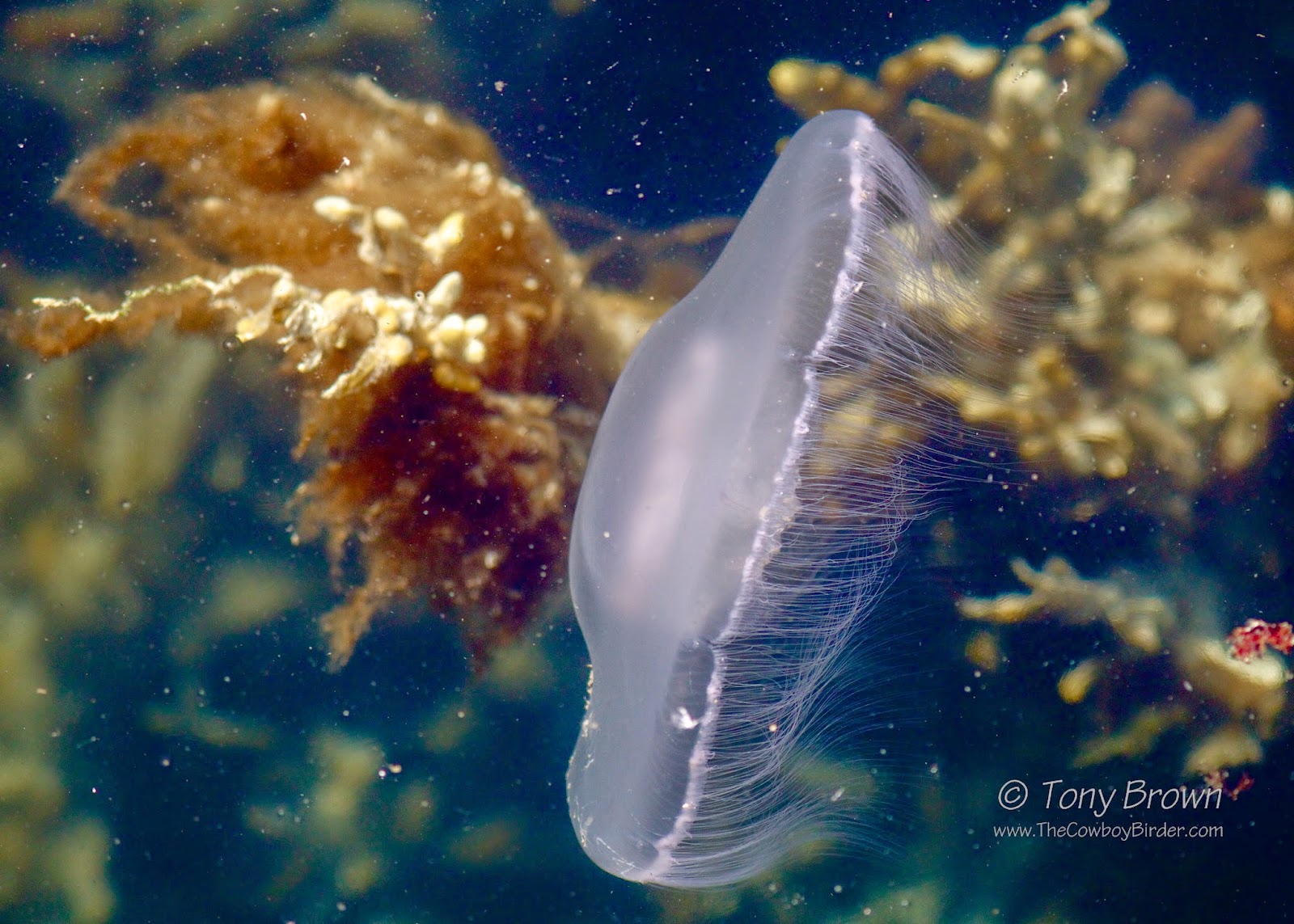 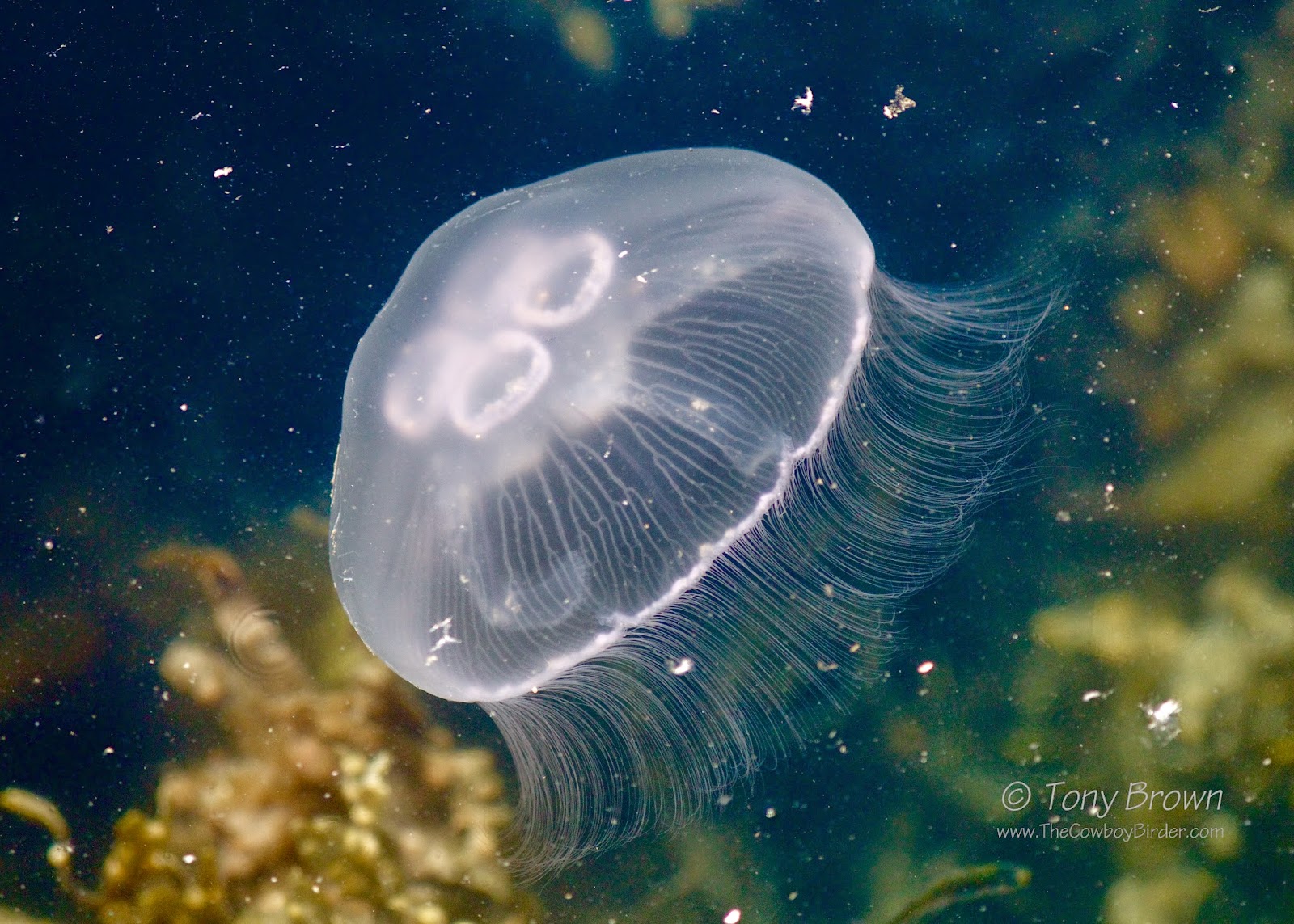 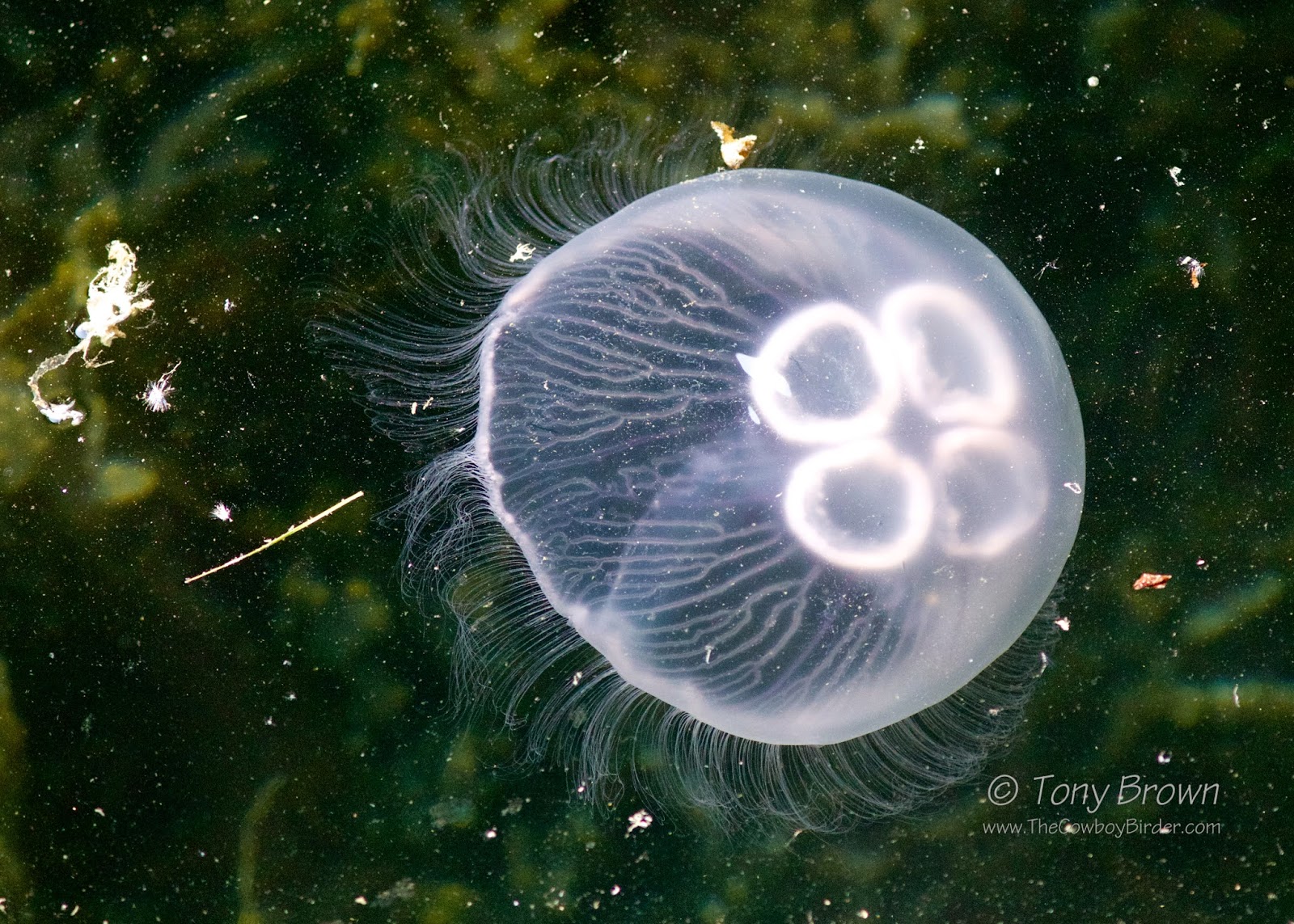 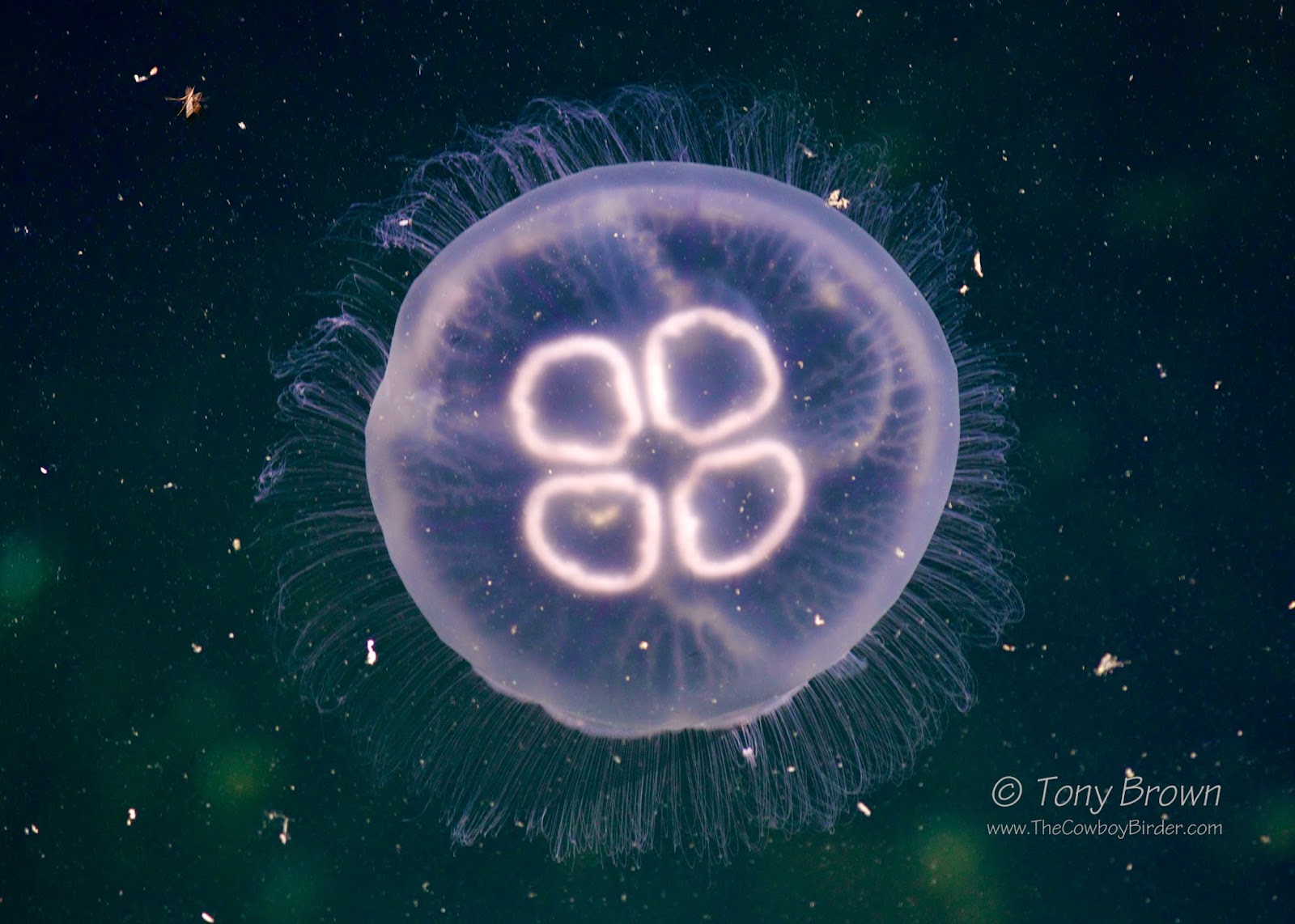 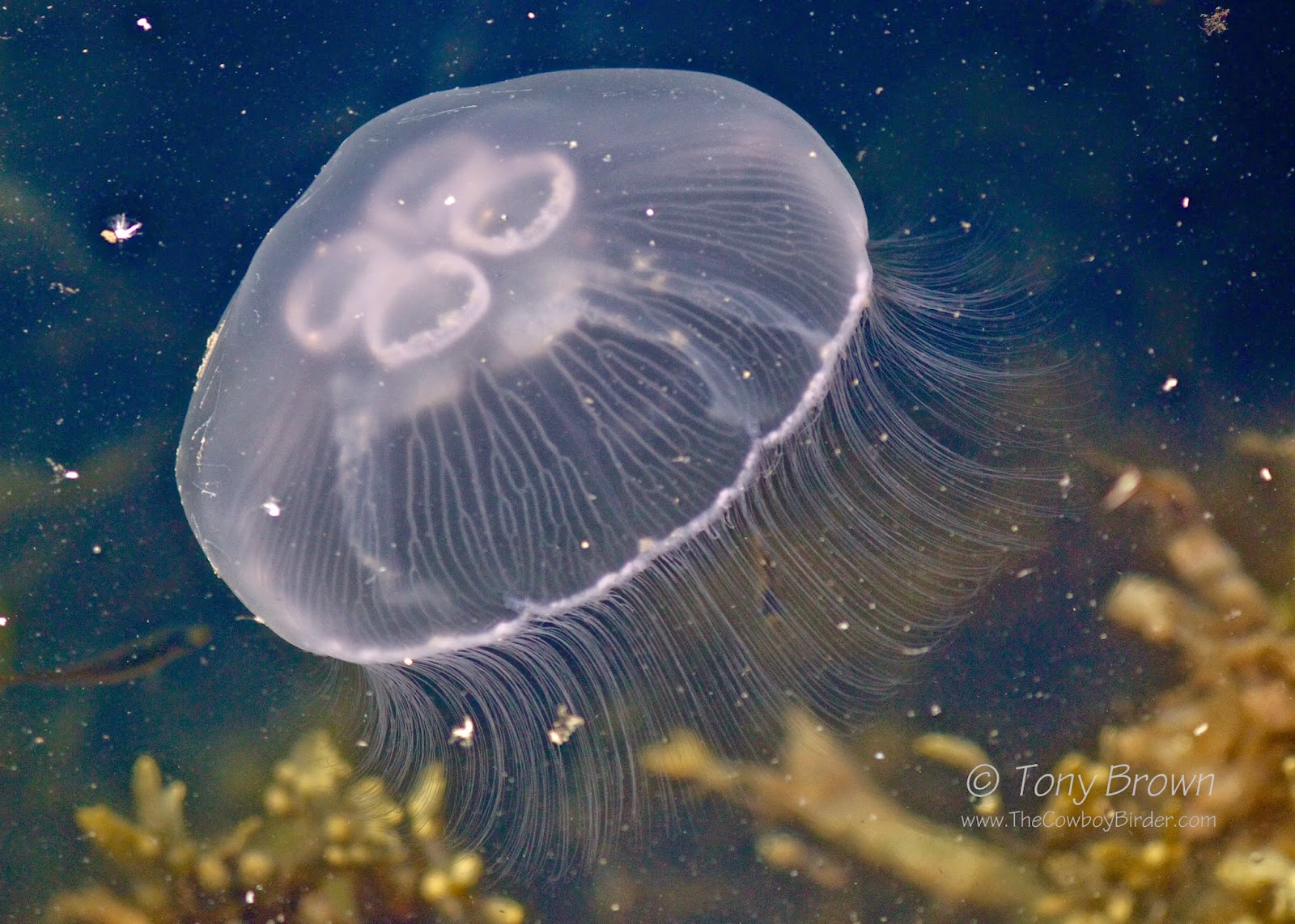 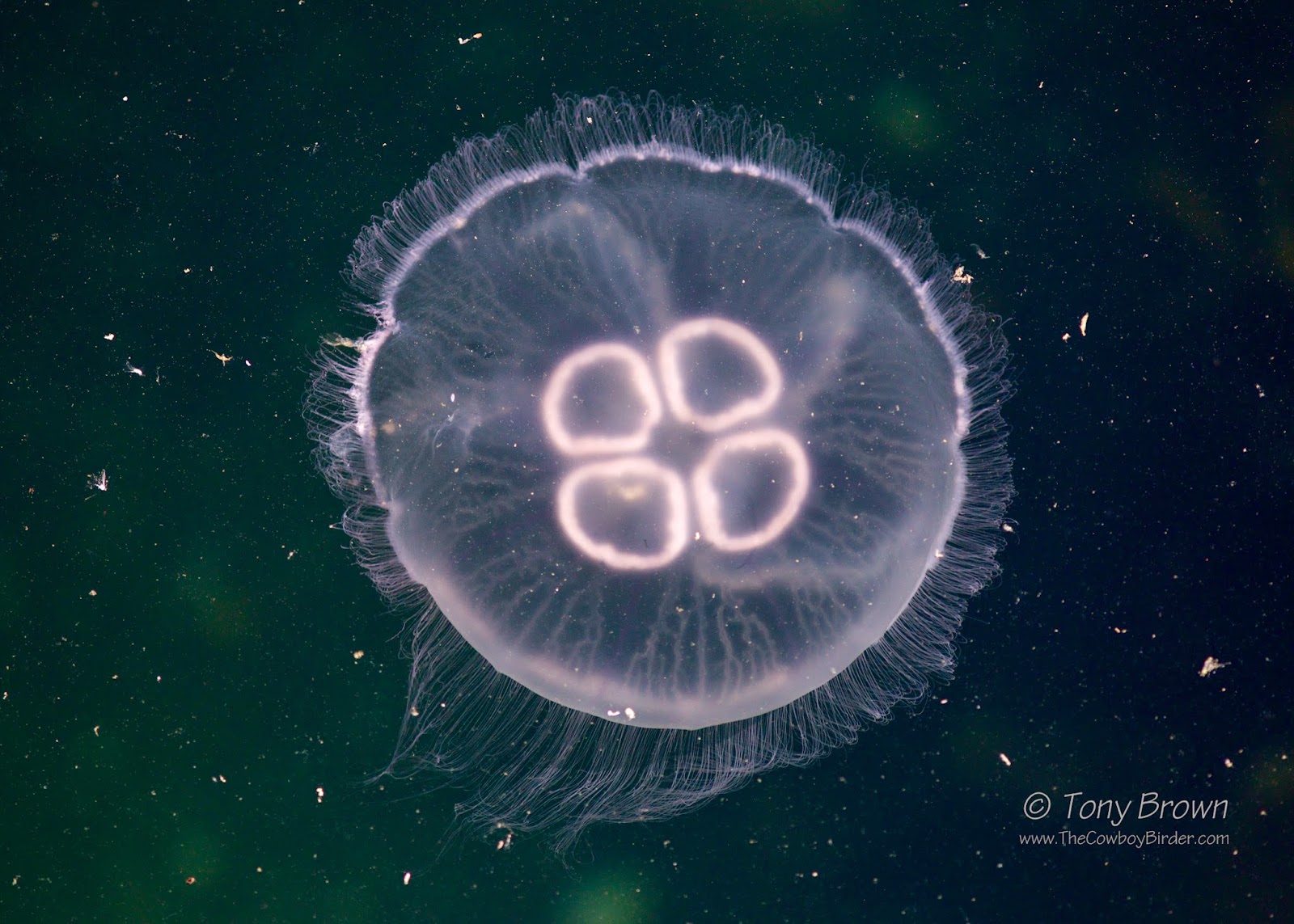 I know very little about Jellyfish and was more used to seeing them out of water, typically washed up on a beach, but seeing them at home in the clear water of a Scottish loch was fascinating. Their translucent vein covered bodies at times seemed to glow a neon pink - depending on the light and the darkness of the water created by the shadow of the jetty. I was transfixed as they passed close by, their angel hair tentacles flowed and trailed serenly as they gently pulsed through the water aided by the tide, at times it looked as if they were coming up for air as they broke the surface of the water - this had been an unexpected bonus I hadn't planned for on the Isle of Skye.

Email ThisBlogThis!Share to TwitterShare to FacebookShare to Pinterest
Labels: Isle of Skye, Scotland

Prior to seeing the White-tailed Eagle on Rum, our boat visited the island of Canna and its seabirds. The boat manouvered slowly passed the rocky cliff face allowing us remarkably close views of an array of seabirds which included Black Guillemot, Guillemot, Puffin, Razorbill, Shag, Fulmar and Kittiwake. Most of the birds were oblivious to our attentions, but a few of the auks did put on a bit of a show by diving into the sea passing beneath the boat, before surfacing just metres away from us. If watching seabirds at such close range wasn't good enough, what made this an even more memorable experience was the appearance of a Golden Eagle at the top of the cliff, this created a bit of a panic amongst the colony, with many more auks diving into the sea to avoid its attentions. This was the second Golden Eagle on our trip, with the first being a distant bird being mobed by a Raven over the cliffs near the Old Man of Storr, north of Portree. 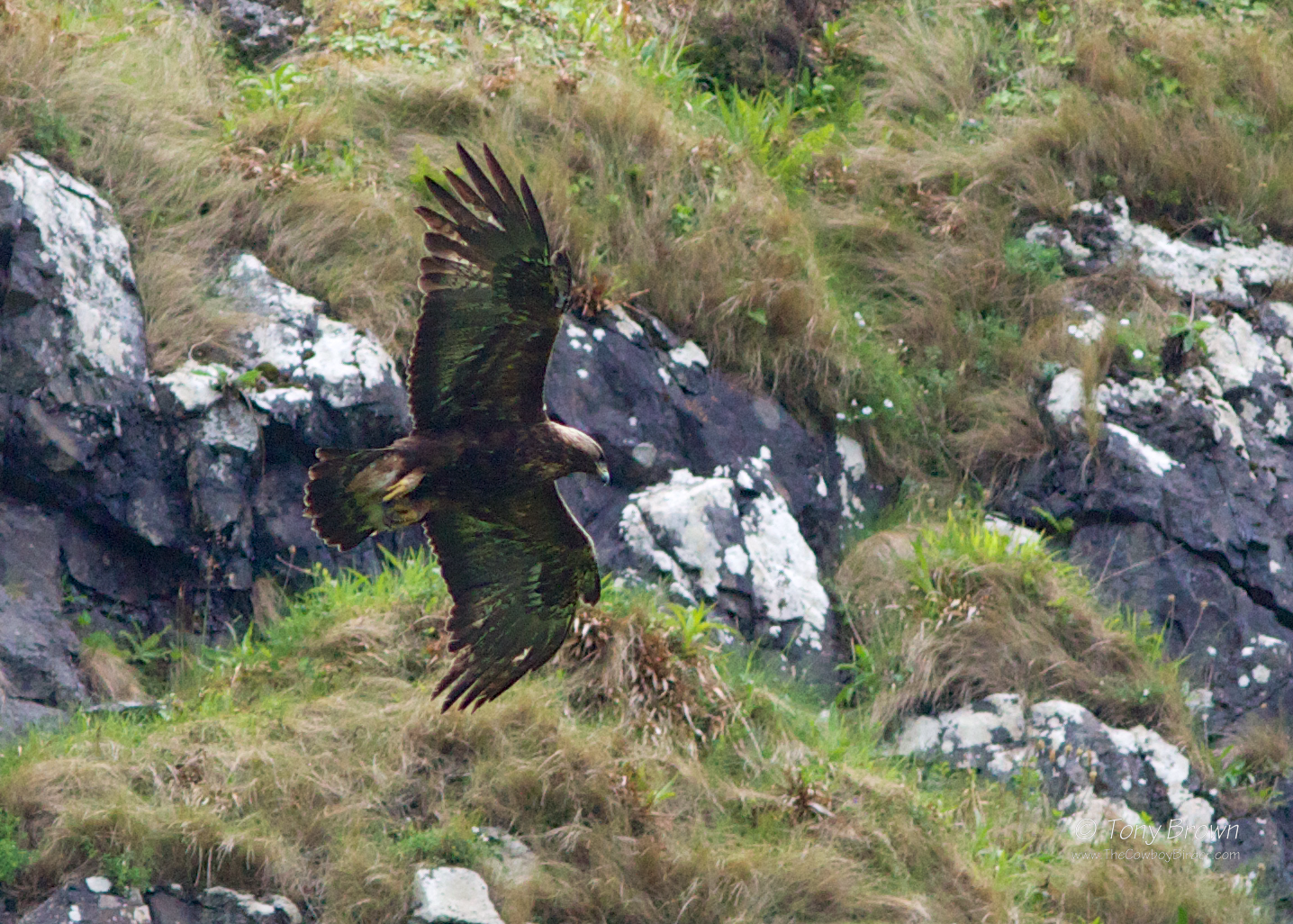 We also added a raft of Manx Shearwaters (although distant) several Great Skuas and a pod of Common Dolphins on our four hour round trip of the small isles - and I wasn't sick once! Although it did help that the boat we travelled on was an open top RIB (riged-inflatable boat) with twin V8 engines enabling us to cut through the waves - I promise you it's the only way to travel if you need to get across any stretch of water quickly and you're a London landlubber like myself!

When we booked our family holiday to the Isle of Skye, we were all very much looking forward to seeing one speciality bird of the Island in particular - White-tailed Eagle.

In the week we had on the island we managed four encounters (fewer than I had expected) with this magnificent Eagle. On two separate occasions a single bird flew high over the property in which we were staying on the hillside overlooking Loch Harport in Carbost. We had another bird virtually fly along side the hire car in the south of the island near Elgol - sadly the camera was in the boot of the car at the time but great views were had by all through the bins (safely kept in the glove box for such an occasion).

But on a boat trip around the small isles (Soay, Canna, Eigg, Rum and Muck) the individual below performed the best for the camera. As the boat took us along the rocky coast line of the Isle of Rum, we picked out the silhouette of a single bird perched high up on the cliff edge, ever watchful, we waited until it took flight, finally taking-off the bird circled the cliff face, those huge broad wings quickly taking the bird further along the rocky coast before it was lost to view - but what an amazing encounter for the family. 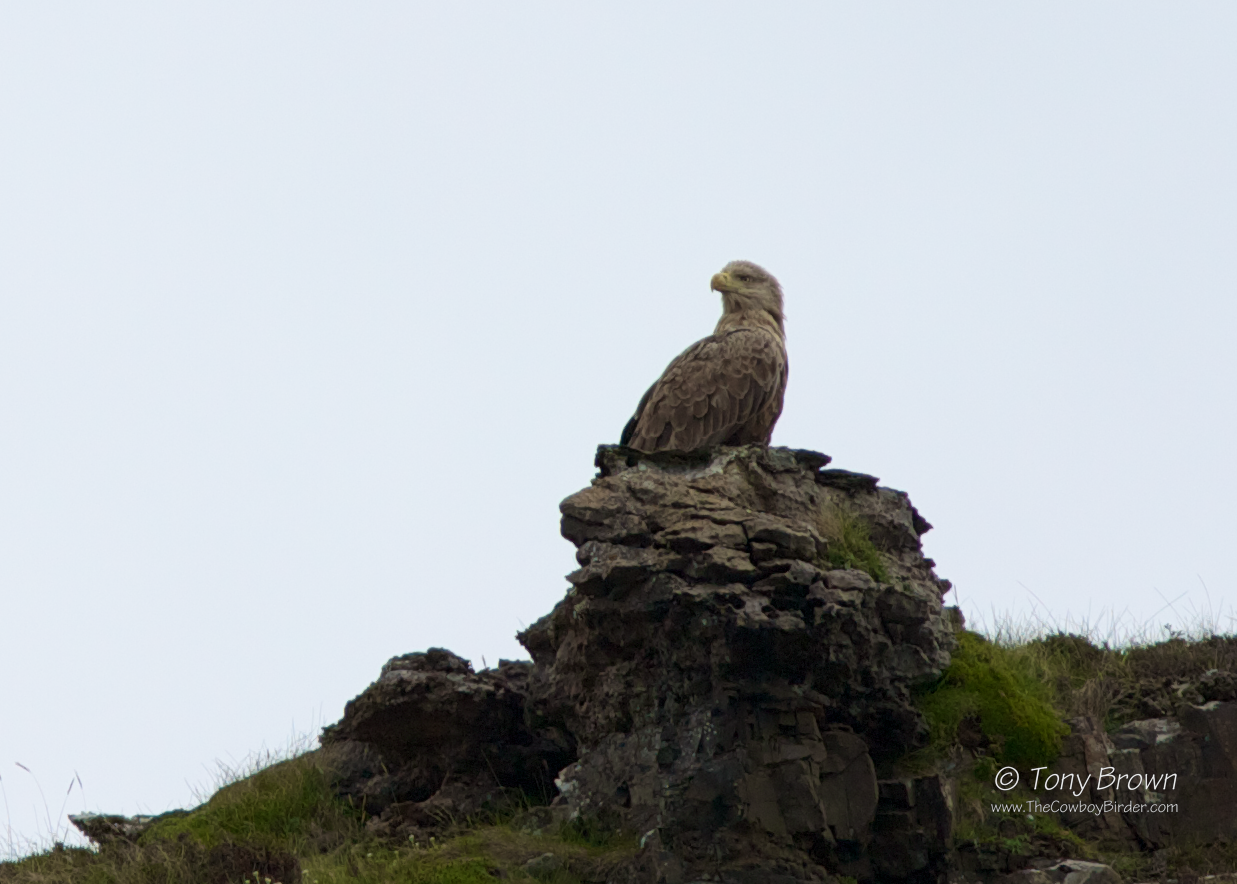 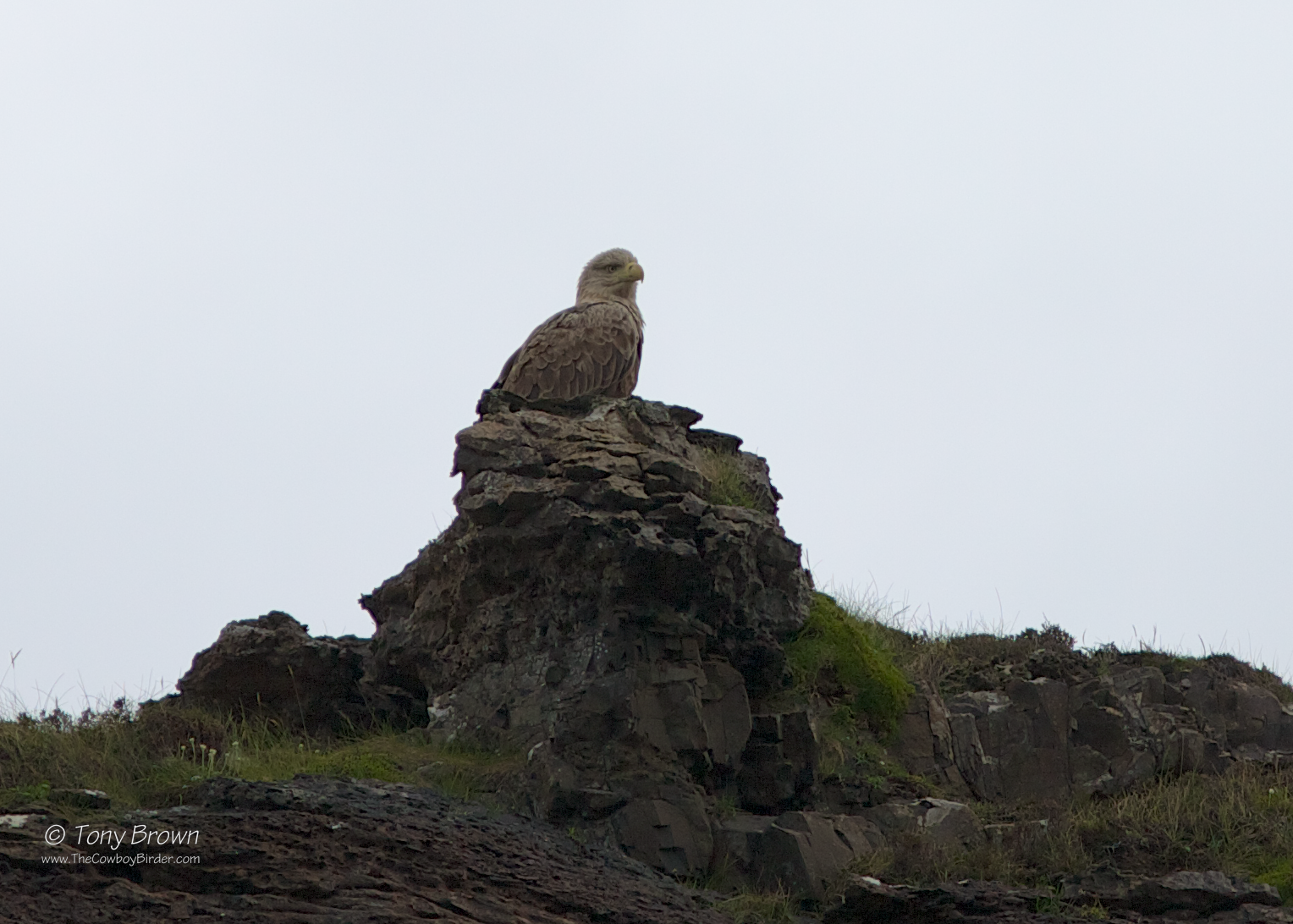 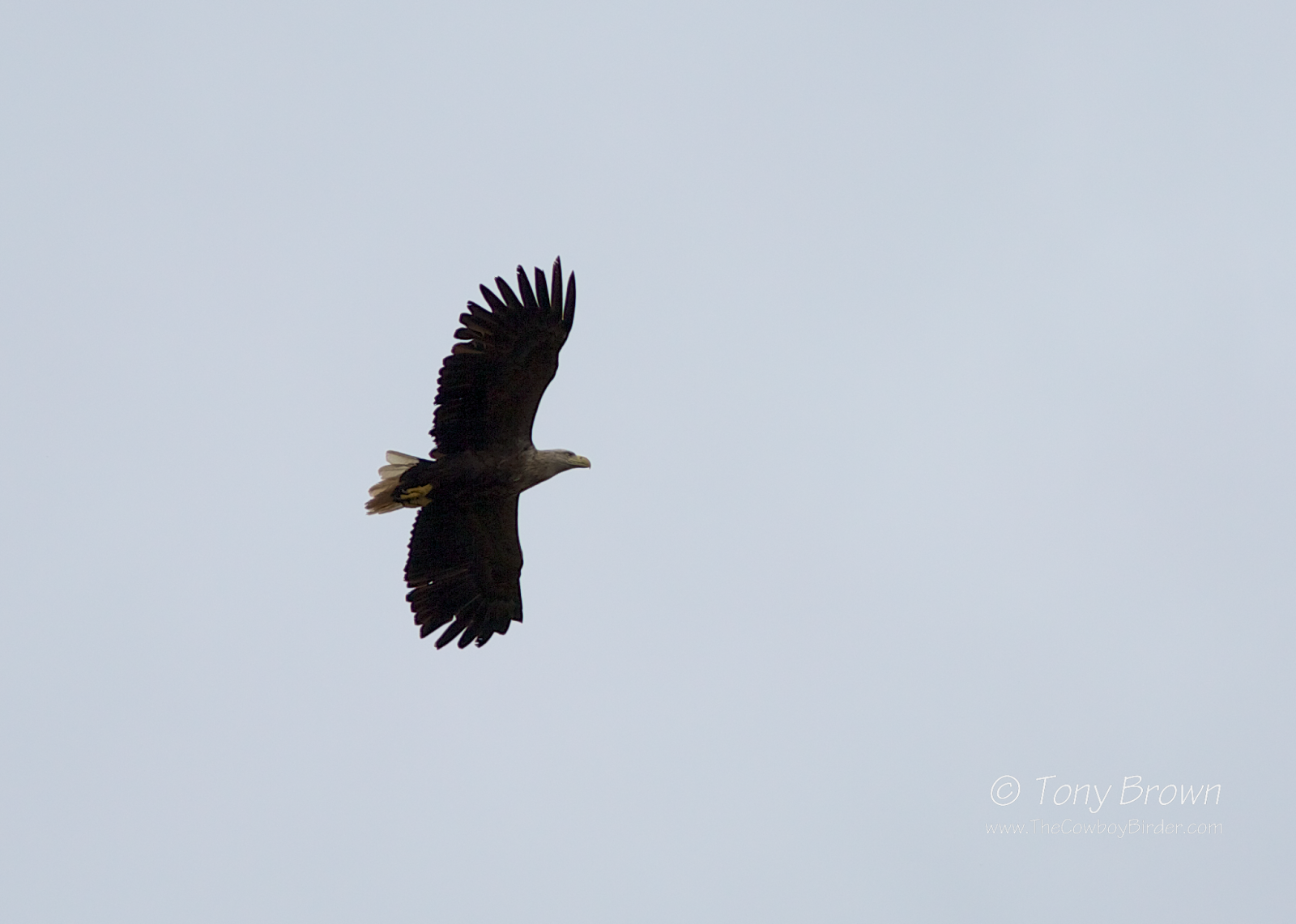 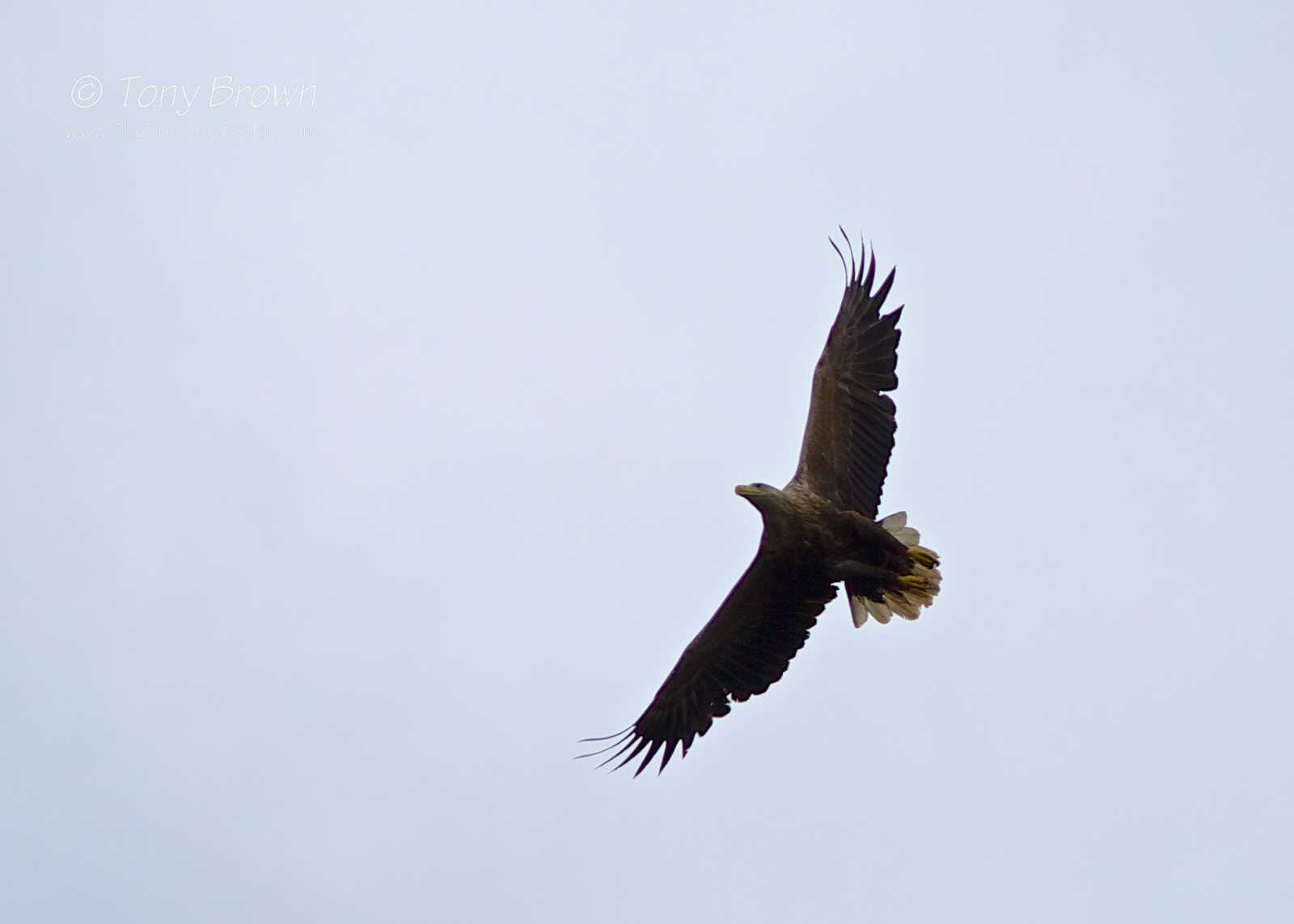