After a week receiving regular news updates about a good sprinkling of autumn migrants coming from the patch, I finally got out amongst it this morning and wasn't disappointed, with up to four Common Redstarts being the highlight - my first of the year and another notch towards my century goal.

A supporting cast of 5 Whinchat, 2 Spotted Flycatcher, 2 Tree Pipit, a Hobby and several flyover Yellow Wagtails kept the morning ticking along nicely - but it was the Redstarts that ultimately stole the show.

The usual Wanstead crew members were out in force, along with Barking's favourite birding son Mr Hawkins, plus several tourist birders keen on seeing what Wanstead had to offer - and why not, good news travels far and wide, and most often than not Wanstead delivers - especially at this time of year, all we're missing now is that Wryneck - hopefully any day now... 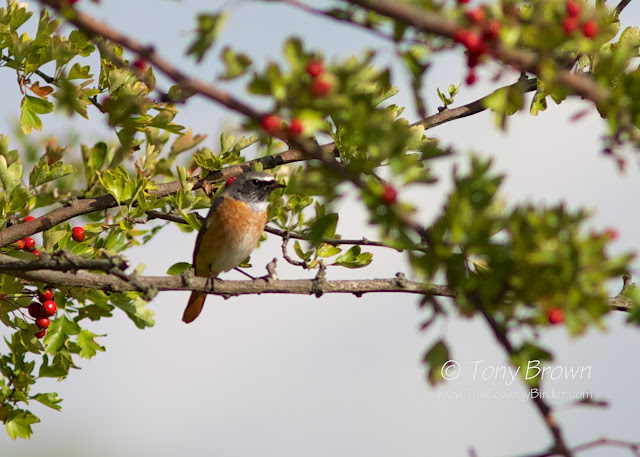 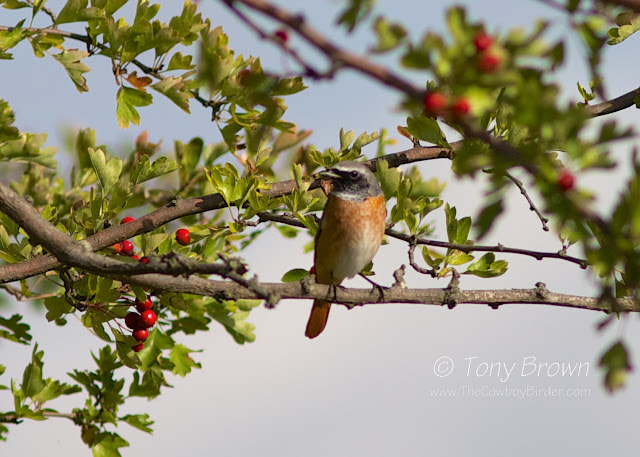 No apologies for posting a photo heavy series of images of a super showy Pied Flycatcher from Wanstead Flats this morning - especially after the last one was so difficult to pin down. The location this time was a small sheltered Oak in Long Wood, in which the bird stayed faithful to all morning.

Birding a patch is a funny old game at times, prior to this autumn I had only ever seen one Pied Fly in over five years of slog around the Flats - I've now found two birds in a space of eight days!

This was Wanstead's third Pied Flycatcher of the autumn, which surely cements its place as one of the best sites in London to catch up with this passage favourite? I also had Whinchat, Tree Pipit, 3 Spotted Flycatchers and a finally Yellow Wagtail (96), although Common Redstart still continues to elude me... 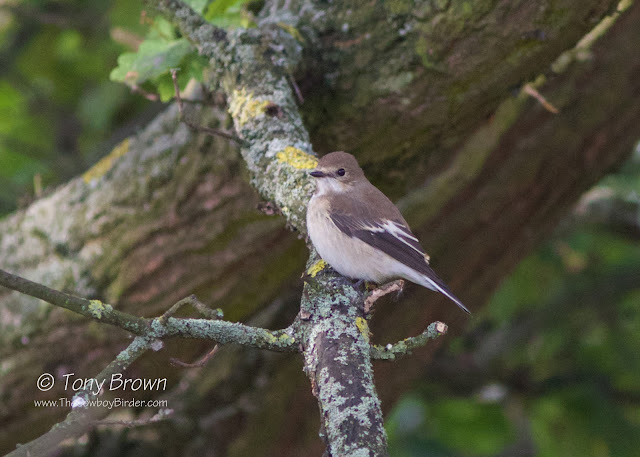 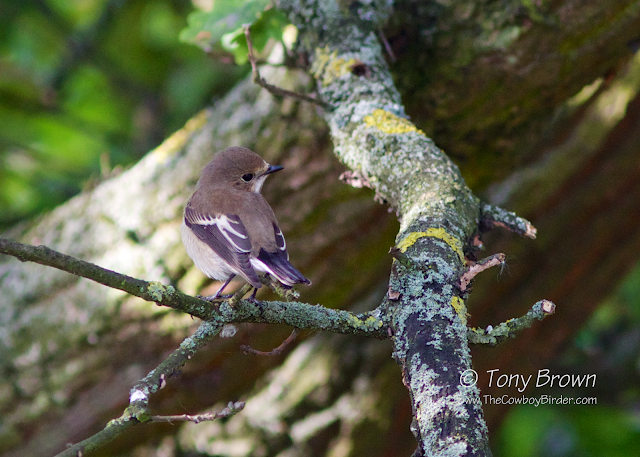 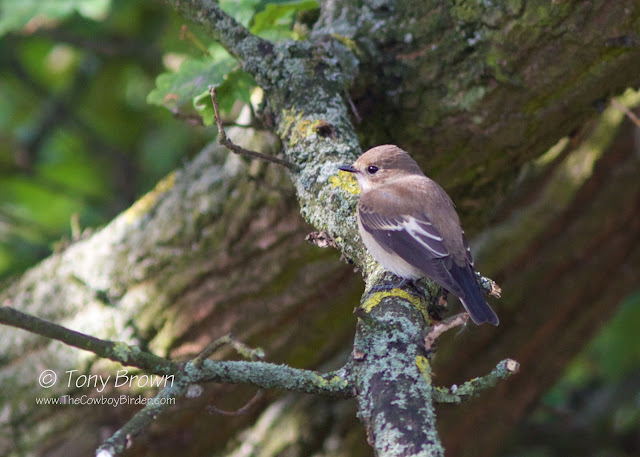 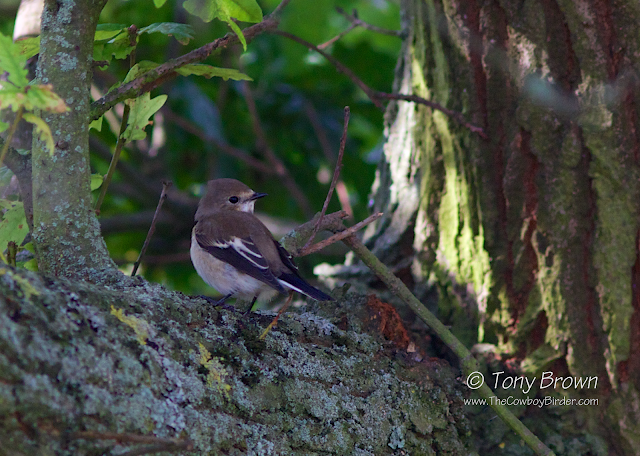 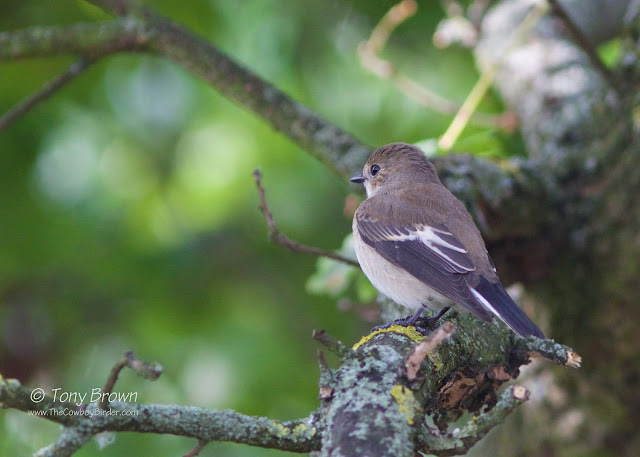 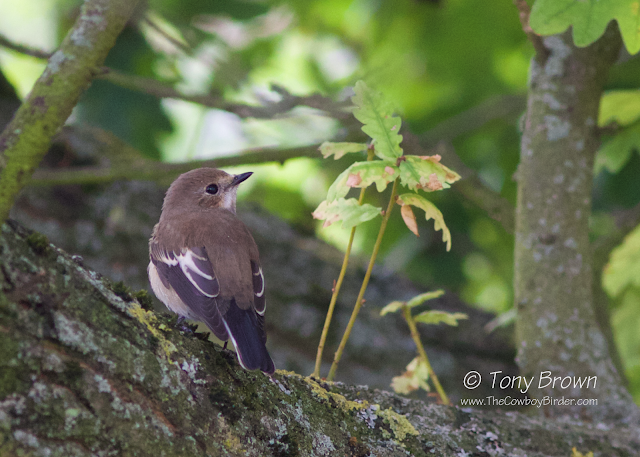 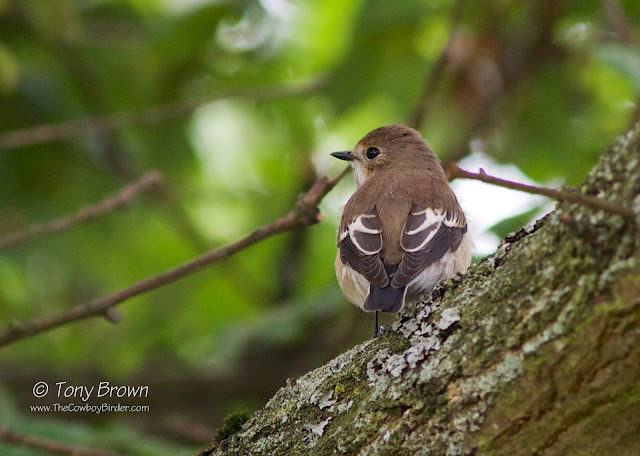 A trio of Tree Pipits

After the weekends success in adding Pied Flycatcher to the patch year list, I've managed to add a couple more autumn favourites to the list during the week, Spotted Flycatcher and this cracking Tree Pipit - one of three birds which have been seen around Long Wood in the past couple of days. The total now stands at 95 and with a good chance of adding both Yellow Wagtail and hopefully a Common Redstart this weekend, I'm edging ever closer to breaking that elusive century of patch birds for the year. 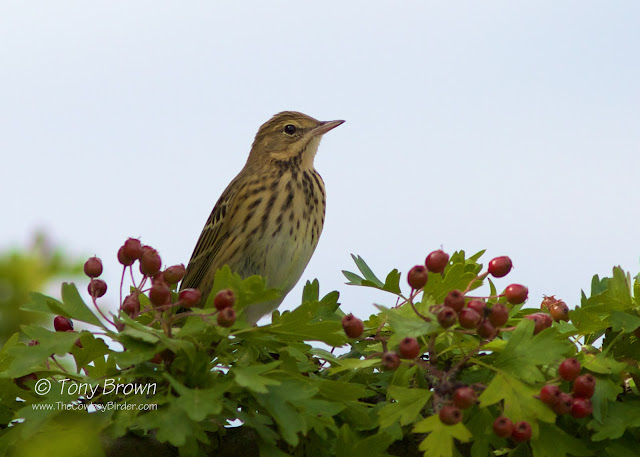 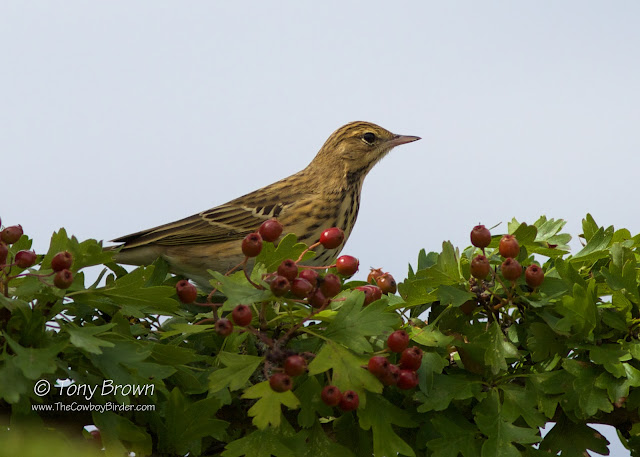 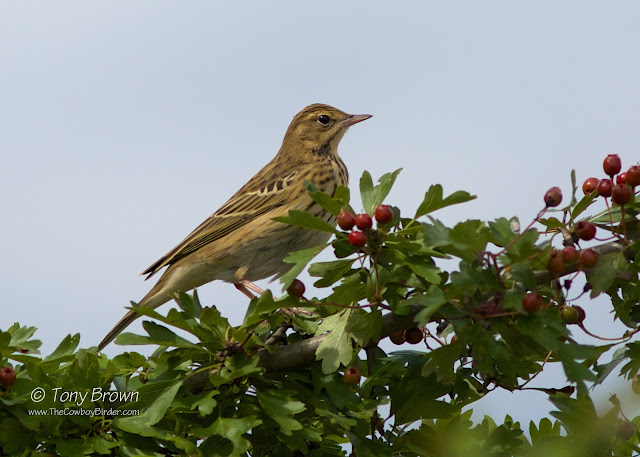 After an evening in the pub with the rest of the Wanstead birding crew, were I enjoyed mostly talking rubbish, as ale after ale continued to flow. We had all met up to wish fellow patch-worker Dan well in his new Devon adventure - I'm sure he's going to miss the patch but maybe not as much as the Witherspoon pint drinking, tattooed ladies of Leytonstone!

As my birding colleagues slept off their hangovers, I stole a march on them all and was up and out on the Flats before 7.00am. Dehydrated and feeling a little jaded myself, I headed towards the SSSI area, soon I was watching good numbers of Willow Warbler and Chiffchaff feeding amongst the young Birch trees when I recognised the contact call of a Pied Flycatcher. Earlier in the week I had missed the previous patch Pied Fly by just a few minutes, so this was a little a bit of redemption and reward for dragging myself out of bed. I could just pick out the bird in the heavy leafy cover of one of the Lime Trees and quickly put the message out to last nights motley crew, slowly one by one they all soon put in an appearance - some looking and smelling better than others (you know who you are).

I believe the bird stuck around for most of the day, allowing everyone to eventually connect with this quality autumn bird. This was only my second Pied Fly on the patch having missed several in the past, never an easy bird to catch up with and always difficult to photograph amongst the shaded leafy cover - not made any easier by the slow reactions of a tired and hungover bloke behind the camera! 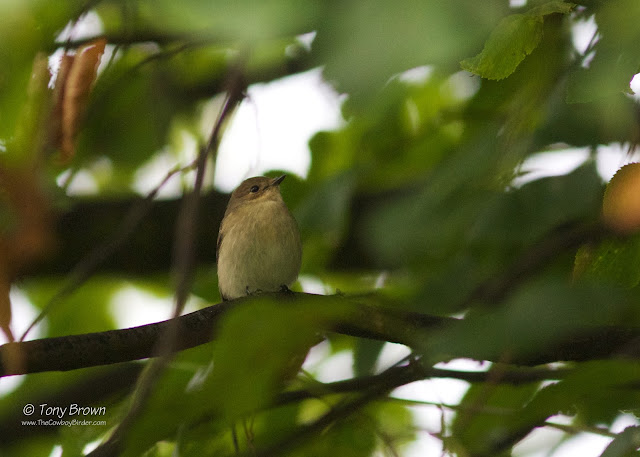 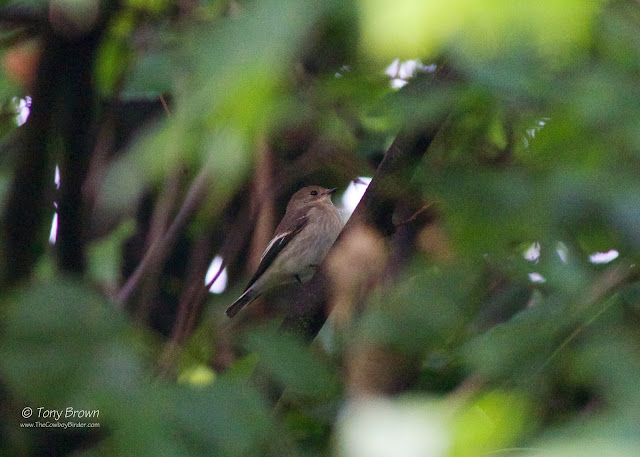 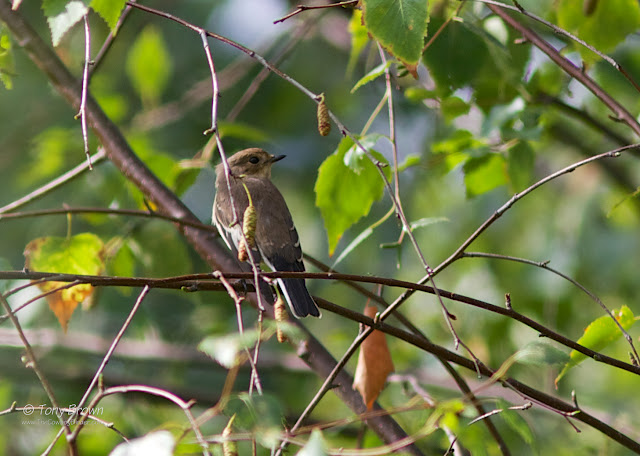 Little Owl - Once in a Blue Moon

Given the choice between visiting Wanstead Flats alone at dusk or dawn in search of Little Owl, I not surprisingly decided to go for the considerably safer option, and was parked up at Centre Road car park at 4.30am in near darkness - the bright full Blue Moon did provide a little twilight. I did a quick personal check before leaving the relative safety of the car; bins, camera, silver bullet, wooden stake, crucifix, garlic baguette! Bleary-eyed and attempting to lace up my boots, I could hear the call of a distant Little Owl - result! But oddly the call seemed to be coming from across Centre Road and in the opposite direction I would have imagined - being alone in the dark can play odd tricks on the mind...

Following up from where I believed the call had been coming from drew a blank, so I left and headed back across the Flats towards Alexandra Lake, passing between two of the centre most wooded copse, I then hear the repeated call again - but this time a lot clearer and closer. The bird had to be right above me in one of the copse, aided by the repeated calling, I managed to pick out the birds silhouette and with sun starting to rise, this just gave me enough light to photograph the calling bird high up in an Oak tree.

Historically Wanstead Little Owls have been notoriously difficult to photograph, so in the twilight of a Blue Moon and with the camera's ISO bumped up to 8000 - it was great to finally get a couple of record shots for the Wanstead archives.

Just a couple of nagging questions remained: Were there now two calling birds on the Flats and where did that garlic baguette come from? 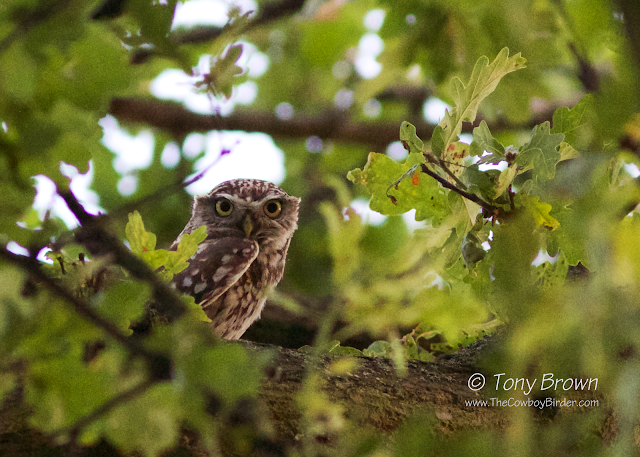 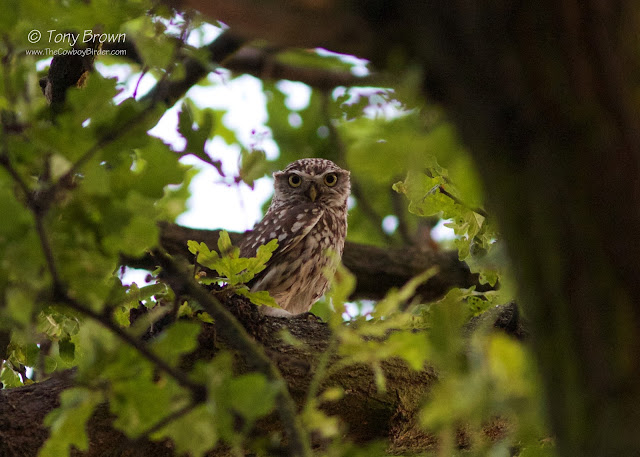