Hopefully any day now... (was how my previous blog page finished) and then 48hrs later - bam! A visiting birder goes and finds a Wryneck on the Flats - and the timing couldn't have been better, I was just about to sit down for a family evening meal when I received the news! The easy option would have been to play it cool, having previously seen two birds on the patch, and also knowing they usually stick around for a few days in the autumn, but oh no - the draw of seeing another patch Wryneck was just to strong, and I made my apologies/excuses and jumped in the car.

To be honest it was all a bit of anticlimax, I did catch up with the bird but only in flight a couple of times, and I never quite got the views I had hoped for. It's my own fault it was all a bit of anticlimax - I always set the bar high, and I'm constantly filling up my head with these amazing images of birds (which this time happens to be a Wryneck) feeding just feet away on an ant hill in the open, tossing ants into the air, whilst rotating its head through 360 degrees - yep, crazy I know, but that's how I visualise the scene as I cut someone else up on a roundabout as I rocket towards the Flats, jumping red lights and picking up speeding fines along the way.

I'm sure the bird will do the decent thing and stick around until at least next weekend, when hopefully those dazzling images in my head will all come true...

In the meantime, here's a photo of a Spotted Flycatcher doing the decent thing and perching nicely on a branch - this photo could have been vastly improved if the Spot Fly had caught a Purple Emperor butterfly - there I go again! 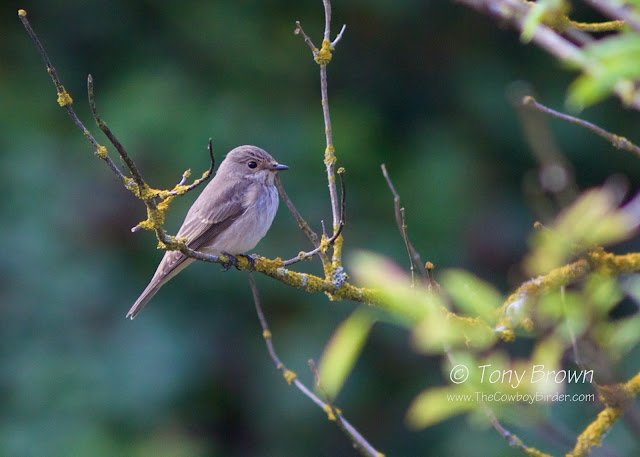 Wryneck was number 98 - the finishing line is within sight!