Saturday morning started with a dawn visit to Rainham Marsh in hope of catching up with the Golden Oriole which Howard Vaughan had heard singing at the west end of the reserve the previous day, but unfortunately the bird had quickly moved on overnight - this was a real shame as it's been a number years since I've seen Golden Oriole, and with no news of any returning birds at Lakenheath it has become increasingly difficult to catch up with these birds in the UK.

Thinking my morning was over after seeing the usual bits and bobs at Rainham (Marsh Harrier, Hobby, Cuckoo and Stonechat), I received news of a Spotted Sandpiper at Brent Reservoir, so just over an hour later (the North circular was quiet for once) I was on site and enjoying excellent scope views from the hide of a cracking summer plumage Spotted Sandpiper, initially the bird was sitting motionless on one of the Tern rafts before later flying between the half dozen other rafts and then disappearing around a bend and out of sight from the hide. It did cross my mind to then head straight over to Rye Meads to see the Purple Heron which had also been found that morning, but time was against me as parental duties called in the form of football training pick-up and a summer school fayre to attend as well.

A bit of a shameful admission but this was my first visit to Brent Reservoir, despite it only being about 15 miles away I've never had a good reason to make the short trip, but judging by the excellent habitat on view I'm sure over the years the site has had a number of good birds, but they must have all been midweek or when I've been away - well that's my poor excuse anyway. The part of the reservoir where the Spotted Sandpiper was situated was heavily covered in vegetation so it wasn't until I had stepped into the hide and peered through the shutters that I'd noticed the iconic arch of new Wembley Stadium reaching into the sky, I'm not sure everyone would be happy with the view but personally (as a football fan) I thought it was great and sure beats having a sterile 70's style block of flats or some concrete office type building ruining the skyline, which you might expect around an urban birding site in London.

I got in from work and quickly changed into my cycling gear and was just about to run out of the door when...

And for the 2nd blogpost running the green stuff has put in an appearance on these pages, but no excuses for covering them with wonderful images of Bee Orchids.

Mr Wanstead Bio-blitz (Tim Harris) found these exquisite Bee Orchids in the outer reaches of Wanstead Flats - just off a main pathway and close to a main road. I can see why they could be easily be overlooked - it took me over twenty minutes to find them and that was despite knowing the OS grid reference and included an additional telephone call to get precise directions, but I'm so glad I made the effort - I'm now hoping to make it a hatrick of green stuff posts by ditching the bins at the weekend and finding my own rare flower! 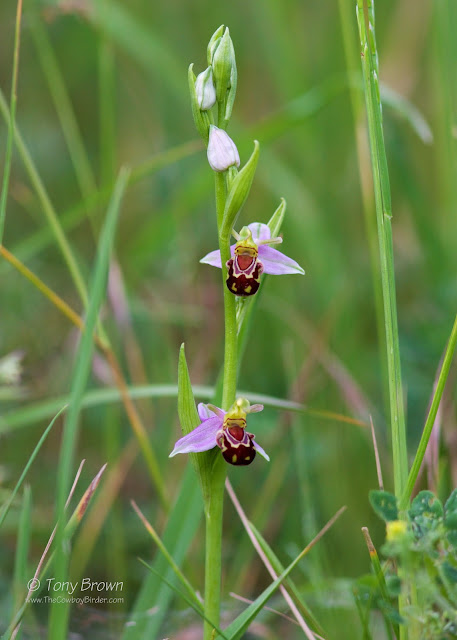 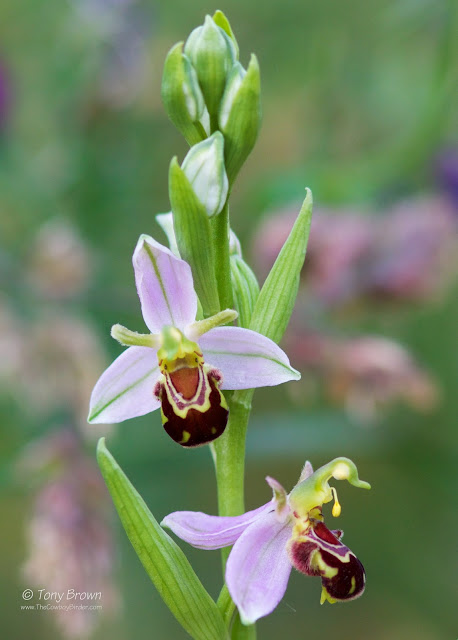 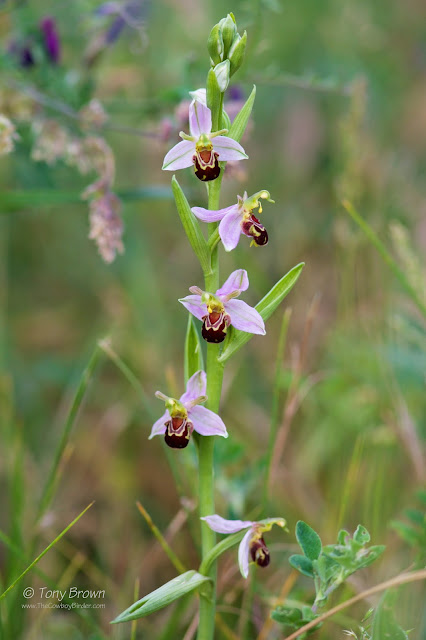 The Wren Wildlife Group's second annual bio-blitz will take place this month, giving Wanstead residents of all ages the chance to learn more about local flora and fauna.
The weekend of free activities kicks off with a night-time bat walk in Wanstead Park on 24 June.
Local botanist Tricia Moxey will lead two walks – one on Wanstead Flats (25 June) and one in the park (26 June) – looking at trees, wildflowers and insects.
A dawn chorus birdwatching walk led by Nick Croft will also take place in the park from 5am on 26 June, meeting at the riding stables in Empress Avenue.
More information can be found on the Wren Group website.