Surf, Pasties and a Pelican

Well...it would have been rude not to have paid this big old bird a visit whilst holidaying in Cornwall with the family - especially as it's potentially a 1st for Britain.

A wonderful week of sun, sea and surf in Cornwall, along with far too many pasties and I was playing it super cool, leaving it until our last day before making the short 45 minute drive from our base near Padstow to Point Quay on Restronguet Creek to have a look at the now long staying (knocking around Cornwall since 7th May) adult Dalmatian Pelican - it was just a shame the bird was showing so distantly.

The bird has been favouring an exposed spit visible at low tide in the middle of the creek, so when I arrived there it was asleep with head in wing, not looking that dissimilar to a Mute Swan - as I only had my bins I was grateful to another birder who let me view the bird through his scope. Thankfully the bird did eventually move, standing up and going for a bit of a walk along the spit, finishing with a bit of a preen before slumping down again for another snooze.

It would've been great to have witnessed the bird in flight and seeing that big 3 metre wingspan in action but alas it wasn't to be, and soon my all too brief visit to Point Quay was over, as I had some more waves to catch and a meeting with another pasty - surfs up! 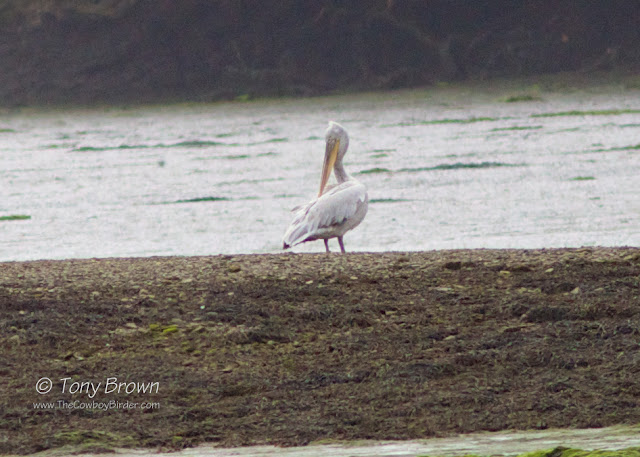