I have started my Wanstead patch list but as it's currently sitting on 54 (list here) with nothing out of the ordinary to report, I thought I would start the new year with a post regarding recent Gull recoveries on Wanstead Flats, in particular the Common Gull (J9R5) below.

This bird has a very interesting history, it was first ringed in July 1998 in Bergen Norway before being re-caught again in the same location in July 2011 - and this time the bird was colour-ringed (J9R5), and then for 15+ years it was regularly recorded in Bergen with last time being 15th July 2016 and then 6 months later on the 29th Dec 2016 it was recorded on Wanstead Flats and for the 1st time away from Norway, covering a distance of 640 miles to get here.

Here is the current list of colour-ringed Gulls recorded on Wanstead Flats. 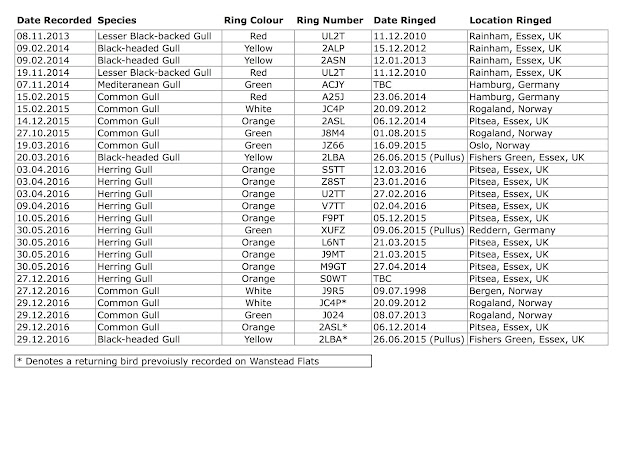 If you do see a colour-ringed Gull on Wanstead Flats please let me know and I will add the information to our growing list. Many thanks to Dante Shepherd for providing his recent sightings.