Any wader on the patch was always revered at Wanstead and this homage would even extend to the lowly Common Sandpiper, by far and away our most numerous wader during spring and autumn passage. However, with the introduction of 'Nocmigging' (for the uninitiated, that's sound recording nocturnal migration) these once locally cherished group of birds have now seen their crown slip a little, as more waders are now being recorded flying over Wanstead airspace at night.

Call me an old fashioned cowboy but I personally like to see my waders as in the image below and not as a series of dashes on a spectrogram, and yes I do get the science part and I do have some interest as to what's flying over at night. There's definitely a place at the table for capturing and recording this information but please don't tell me that listening to a recorded sound (often barely audible), downloaded and run through a software package (Audacity) to produce a visual representation as a couple of black marks on a sound file (just to aid identification for the recorder) is going to come anyway near to the experience of seeing your first passage Common Sandpiper of spring, bobbing up and down on the muddy fringe of a river bank - whatever next...binoculars that can identity the birds for you! 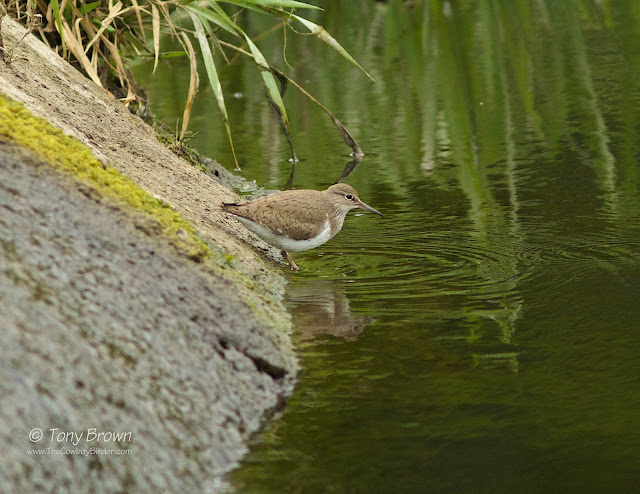 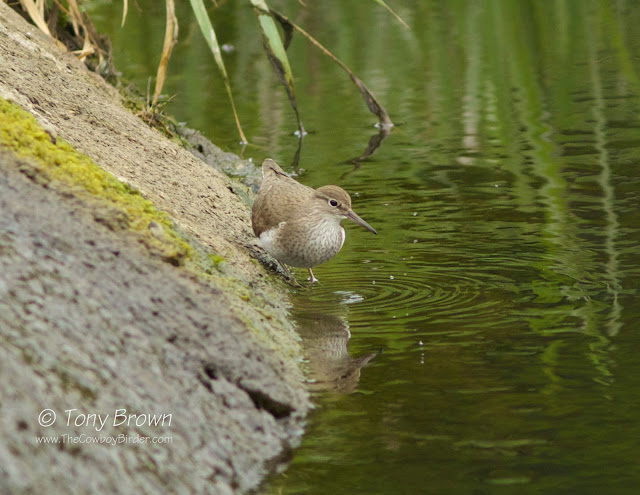 A Plea from the Skylarks of Wanstead

With possibly only 3 breeding pairs left, have we finally reached the tipping point for the Skylarks of Wanstead? This is a plea to the visitors of Wanstead Flats to please, please stick to the main footpaths which lead around the Flats and dog owners please keep your pets on a lead (or at least under control) as this is now the critical time for our remaining ground nesting birds.

Understandably Wanstead Flats has become a bit of magnet for many more people during this period of lockdown, as everyone makes use of their right to daily exercise as we all continue the fight against the dreadful Covid-19 virus - but could the additional footfall end the Skylarks reign?

The key to saving the Skylark, and the message is simple, 'Keep To The Main Paths' - do this and the Skylark has half a chance and their wonderful song will hopefully continue to fill the skies of east London... 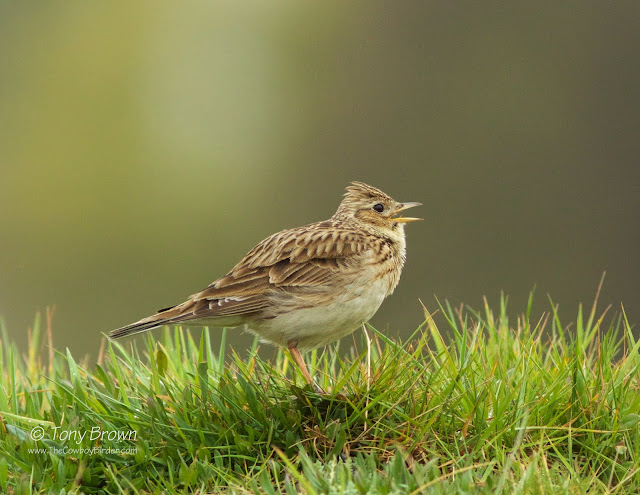 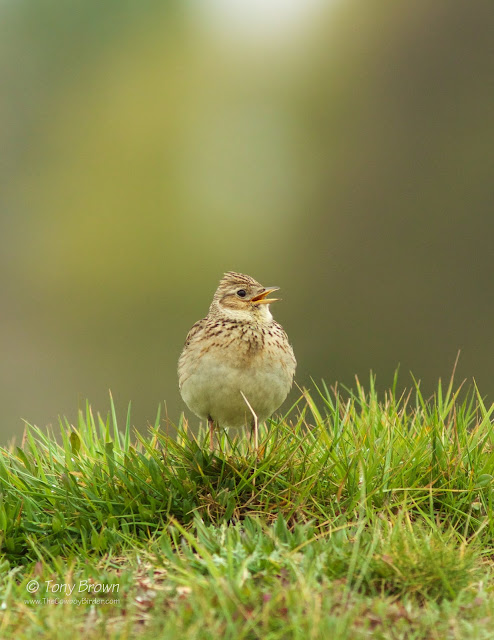 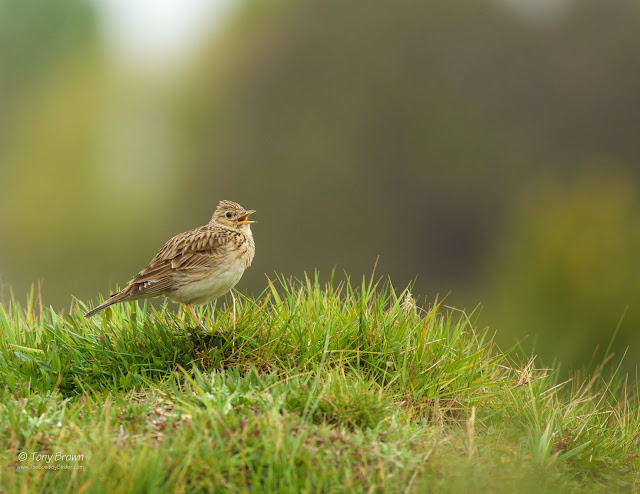 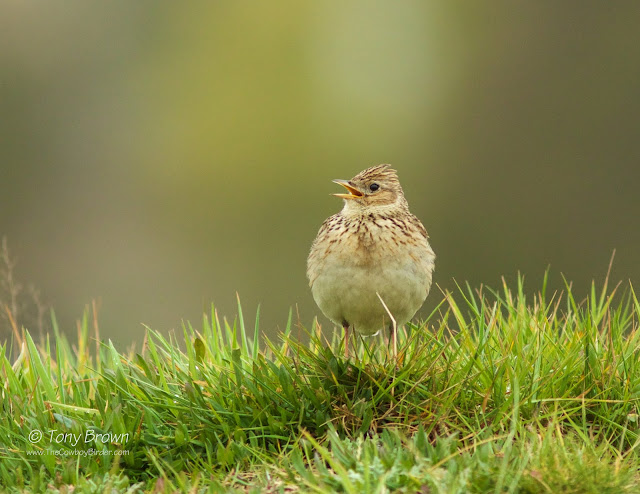 It felt good to be out on the bike this morning, not only because of the exercise (I'm certainly fitter than I was at the start of lockdown 3 weeks ago) but because the overnight rain had dropped in a few common passage migrants on to the Flats. I've been careful in regards to not abusing my daily exercise allowance and have been sensibly limiting my time outside to a couple hours max, this was just long enough to mop up 2 Ring Ouzels, a wonderful singing Willow Warbler, a couple of Wheatears, a flyover Yellow Wagtail and both Common and Lesser Whitethroat - These were all new for the year and only goes to prove how little patch birding I've done during the lockdown period.

As I was leaving I bumped to an old Wanstead favourite - The lonely White-cheeked Turaco!
This magnificent (if slightly gaudy) creature has now been knocking around Wanstead for what must be the best part of 10 years. Despite it's size and colourful iridescent plumage, including striking red wings when seen in flight, it's surprisingly difficult to see and is often just heard singing and calling without revealing itself.

The Turaco appeared to be carrying nesting material (well it is spring) and unless there's another escapee near by then sadly this effort is all going to be in vain, but I suppose you can't stop nature's natural urge to procreate - It's all a bit odd, but it's what you come to expect from a slightly mad Turaco that believes Wanstead is a juniper forest in Ethiopia!

After the excitement of seeing a Marsh Harrier on the 27th March, I had to wait until the 30th to add a new bird to the lockdown list with Kestrel hovering at a distance but comfortably snaffled in the scope to bring the tally up to 31, this was quickly followed-up with Greenfinch (32) also scoped from some distance - Greenfinch still remains a garden rarity and I still await one to actually visit the garden feeders.

An early start on the 31st and I was rewarded with three Mallard (33) quickly identified through the bins before losing sight of them as they disappeared over the neighbours rooftop. A pair of Mistle Thrush (34) over the garden was a welcome sight and then a single Goldcrest (35) briefly stopped in one of the Birch trees and I was on a roll! An afternoon sky-watch delivered more results with a Peregrine (36) bombing across the skyline - I can be thankful to the local feral Pigeons for alerting me to that one.

The 1st of April dawned the start of a new month and what better way to begin than with a full fat garden tick as a Rook (37) flew low east over the rooftops with that narrow pale bill easily noticeable against the early morning rising sun. The only other new bird on the 1st was a Grey Heron (38) dropping in low behind a row of terraced houses - someone must have a garden pond which is probably missing a few fish now!

The 2nd was noticeable for a movement of Redwing (39) as I recorded c130 in a 2hr hour window from 7.30am mostly going E and NE. The 2nd and 3rd of April will also be remembered for the extraordinary inland movement of Common Scoter through the night, unfortunately they managed to avoid the airspace above Woodford Green but to be honest I didn't give it much of a go and struggled to stay up beyond midnight - I blame the red wine!

Friday 3rd April and I was stood on the patio at the start of another day and for once it didn't feel as cold as previous mornings, I could see movement on the trunk of a tall tree on the horizon and watched as a Green Woodpecker (40) came slowly bouncing towards me. Then a real prize of Fieldfare 'chack-chack-chacking' overhead brought up number 41 on the list - I was almost resigned to missing one of these so was chuffed to add it to the list. This was soon followed by a lone Common Gull (42) another bird that might have been difficult to add with many now on high northern hemisphere breeding sites.

That's week 2 of the lockdown almost complete and I've amassed a reasonable 42 species - with 2 garden ticks. The full list can be viewed here - Lockdown List

The Best Kind of Home-Schooling

I recently found out I had been selected for furlough leave as part of a 70% head count reduction by my employer, this hopefully will keep the business a float whilst we go through the devastating effect of Covid-19. Although this situation is not ideal, I was kind off thankful the government were going to support this extended leave by paying 80% of my wage so I can continue to support the family through this awful crisis. This does mean however that I will be more involved in home-schooling my two boys - as any parent will appreciate this is not as easy as it sounds! I have two typical boys (11 and 13) who mostly enjoy gaming and football and have minimal attention spans when it comes to homework, add my short patience's into the equation and this heady mix of emotions means the next month or two is going to be a really interesting time!

The boys have only ever shown a passing interest in bird-watching and the natural world, so imagine my delight when a female Sparrowhawk perched on the garden fence. In the 15 years of living at our current address this has only ever happened once before - I often see plenty of flyovers but rarely do they venture through our small urban garden. I grabbed the camera and fired-off a few record shots through the kitchen window, the Sparrowhawk appeared to be happily perched so I shouted and gestured to the boys and Mrs B to come and have a look, we all peered through the side kitchen window (this is a small window) and gawped at the Sparrowhawk before it was spooked by a neighbour coming out of their front door - for a minute the boys faces lite-up, eyes wide and mouths open! They both claimed "Wow- that was epic!" and discussed the bright yellow-eye and those sharp talons, before sloping off to hide from the next batch of school work.

I'm hoping in years to come when the boys are all grown up and we're sitting around having dinner, one of them might pipe up and say "Do you remember in 2020 when we were all stuck inside during the Covid-19 period and we saw that Sparrowhawk perched on the fence?". As experiencing a moment like this should stay with a child forever and will last a lot longer in the memory than Trigonometry!