As July patch birding at Wanstead goes today was almost off the scale! Ok - nothing hugely rare but adding three years ticks is virtually unheard off and this was mainly thanks to the efforts of Tim Harris who first picked out a Cetti's Warbler on Shoulder of Mutton lake - a bird new for this location and was probably overdue here as the habitat is perfect for one. This was quickly followed by Common Tern fishing in the same location, and just as I was leaving a message came through from Tim who had seen a Cuckoo on the Plain in Wanstead Park!

Cuckoo is still a very scarce bird at Wanstead even though just a short drive away in the Lee Valley, Ingrebourne Valley and Rainham Marshes they're a relatively common sight throughout the spring and summer months. I'd only ever seen one previous Cuckoo on the patch back in August 2013 so you can imagine my delight when I met up with Tim and bird he'd found was still on view - well sort off - it was deep in cover, low-down in a tree. It soon took flight across the Plain and again flew into more cover. Bob had now showed-up (In his slippers) but the bird wasn't playing ball, then after a 20 minute search I'd found it again, as it briefly perched-up and this time was staring right back at me! A quick shout to Bob but the bird had again flown across the Plain towards Perch Lake. It was now midday and I had to leave so I left Bob to try and find it again - thankfully he did soon after I'd left.

What a cracking bird and well worth the seven year wait!

Not just any Juvenile Green Woodpecker

I was going to post these two photographs of a juvenile Green Woodpecker on Twitter. This may have been seen by a couple hundred people if i'm lucky, and then maybe liked, maybe retweeted and then all too quickly forgotten and lost amongst many thousands of wildlife photos posted every day - but no! I thought I'd add them to the blog and write a few lines about how much I like them - that's the beauty of blogging.

Why I do like the photographs? Well...it's not just the nice, low ground level and eye to eye contact of the subject, but the pose, the subtle head angle as the bird is alerted to my presence and the click of the camera. Then there's the background - not clean, but messy with a blurred depth of field, full of that golden colour of summer - uncut long dry grass, flowing gently in the early morning breeze - that's why I like these photographs and the reason I still blog! 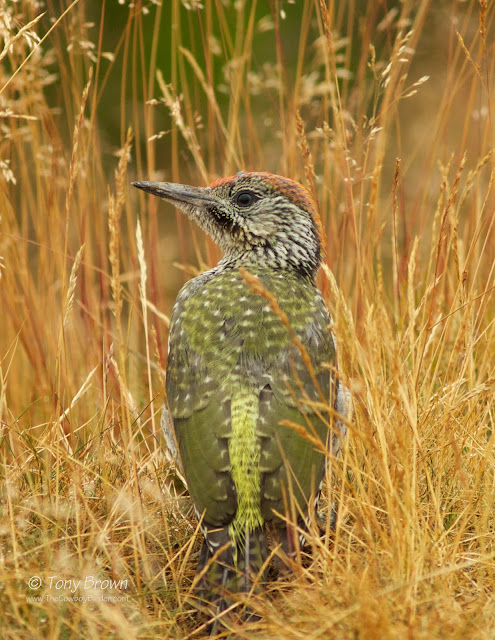 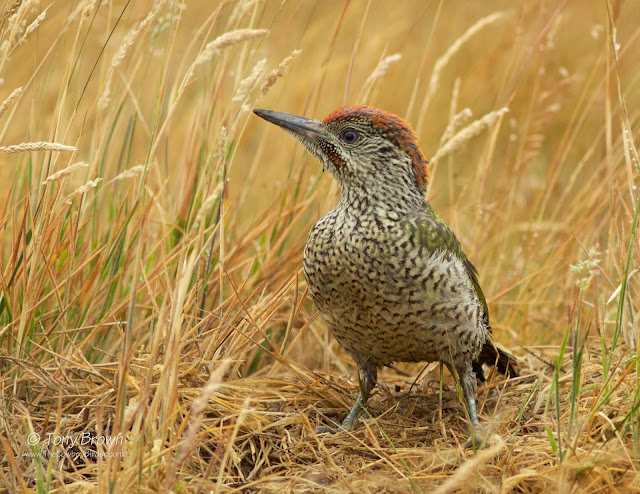