More often than not I don't get rewarded for sifting through each and every Gull on the patch weekend after weekend, but occasionally those efforts do come up trumps - on this occasion it was with a new colour-ringed Common Gull. I also reached a nice little milestone when I discovered the bird amongst the wintering flock of gulls on the football pitches, (JH674) is the 10th Norwegian ringed Common Gull to have wintered in this part of the world (north-east London) - further underlining the strong connection and movements of Common Gulls between the two areas (summer/breeding in Norway and then wintering in the UK/Wanstead).

JH674 was ringed on the 1st July 2018 in Sandnes, Rogaland and is an adult female, it was recorded again in the same area of Norway two years later on the 12th July 2020 before heading south (almost 600 miles) for the winter, showing up on Wanstead Flats on the 12th December 2020 - with this being the only sighting away from Norway.

Here's the list of the 10 Norwegian ringed Common Gulls recorded on Wanstead Flats with the 2nd table showing many of those birds returning year after year. 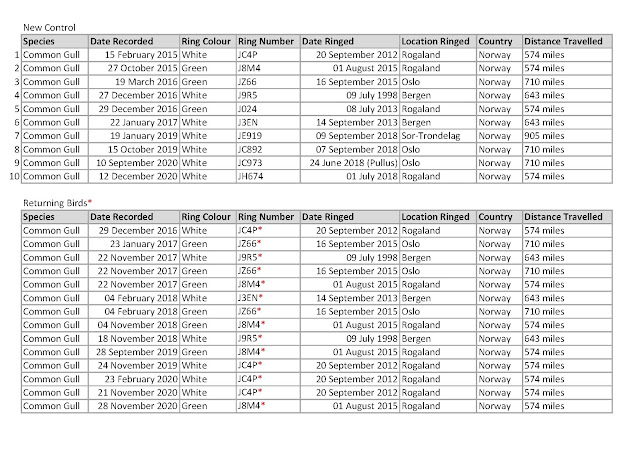