January couldn't have started better with Mediterranean Gull, Goosander and White-fronted Goose all hangovers from 2020 and were easily and gratefully mopped-up on the patch year list as we kicked-off 2021.

A rather friendly Shelduck appeared on Jubilee pond at the start of February, it's origins were questionable but none the less it made a nice change to see one of the deck and not just flying over. The weather at the start of the month had taken a turn for the worse (or good if you're a patch birder) with the beast from the east II delivering a large movement of Lapwing with Team Wanstead recording over 500 birds in a single day (our 2nd highest ever daily total) also a single flock of 10 Snipe was notable and a record count, however the icing on the cake was the discovery of a 1st-winter Kittiwake on Alexandra Lake - a much sort after patch tick having missed two previously.

March is really only about the arrival of Wheatears at Wanstead and our first put in an appearance on the 23rd March much to the delight of Mr Richard Rae who was newly crowned the 2021 Sweepstake winner. Just as I was warming up for the arrival of our Spring migrants, March had other ideas and Winter wasn't over just yet as a report of a leucistic Herring Gull on Alexandra lake had me quizzing the photo and pushing for someone to go and check-out this bird (I couldn't personally get out of work) and then, sure enough my suspicions were confirmed - Iceland Gull! I had to wait until the follow day to see this bird but 'boy old boy' seeing a large white-winger on the patch was a much wanted and hoped for patch-tick.

April finally arrived but the weather was still firmly stuck in Winter mode and spring migrants were thin on the ground. Thankfully, a 1st-winter Caspian Gull was a nice distraction and a singing male Firecrest in the City Of London Cemetery was another bonus as we awaited the arrival of our summer migrants and a change in the weather. The months personal highlight was finding a singing Nightingale in the scrub south of Long Wood, this was just my 3rd ever patch record and only my second spring bird in full and wonderful voice.

April came and went in a flash and May started briskly with a Rook on the deck, this doesn't sound like much but these now annually recorded birds are usually only seen as flyovers. My patch list had moved on nicely to 149 with the recent additions of Iceland Gull and Kittiwake and I thought I'd missed my best opportunity to hit 150 when I'd failed to connect with a flyover Whimbrel (twice) back in April but the short wait was more than worth it with the discovery (thanks to Mary Holden) of a Black-necked Grebe on Alexandra Lake. BNG had been much predicted over the years with birds not too far away in the Lee Valley reservoirs but to see one on the patch was a special moment, especially as I'd finally hit the 150 patch milestone.

June and the birding Summer doldrums were now here...or were they? Just like the first half of 2021 there was another surprise discovery...a singing Quail in the newly fenced area of the Brooms! Had the fenced Skylark protection area played a part in this birds arrival? We'll never know for sure but it certainly created a safe area away from any disturbance from people and dog walkers - perfect for Quail!

July was predictably dull for birds but the Summer plumage Black-necked Grebe continued to delight as we all awaited the arrival of August and those passage migrants.

August finally arrived but mostly disappointed other than my first juvenile Yellow-legged Gull of the season and a juvenile Cuckoo which stayed into September. Apart from a trickle of summer migrants towards the end of the month August was generally forgettable, but now we were entering the business end of migration and September.

September started with a bang - a Wryneck! After a gap of 6 years it was good to add my 4th at Wanstead but kudos went to Jono Lethbridge who happened to turn left as I turned right and bumped right into one of these special patch migrants. As for the rest of the month there was a procession of the the usual Autumn favourites - Pied Fly, Spot Fly, Tree Pipit, Whinchat and Redstarts but nothing else to eclipse the months Wryneck.

October...what can I say? You let me down! We all look forward to October but it was slow, painfully slow - probably the worst October I can remember, hours of slog for little reward - there were a few Brambling and a Jack Snipe, but that kind off sums up my October...forgettable on the patch. Thankfully a week on Shetland saved me from more patch heartache and toil.

November and December sort-off merged into one and continued where October had left off...slow, slow, slow. I added Mandarin Duck and Treecreeper to the patch year list and that was it, my year was over. I should've been more than happy that I had reached a new personal high total of 117 for the year whilst also adding 4 new birds to my patch list (151) but the last few months have been such a struggle that it's left me feeling a little deflated, longing for new challenges and experience's.

Many thanks to all of Team Wanstead for all your news and support (Bacon Rolls and Coffee) here's hoping 2022 bring us all renewed optimism for the future.


And who could forget this transatlantic beauty...the Monarch! A butterfly I've always wanted to see in the UK but never thought I'd be seeing one on Shetland.

Email ThisBlogThis!Share to TwitterShare to FacebookShare to Pinterest
Labels: Shetland

Twitching - there's a novelty! I've not done that for a while (for the obvious reasons - lockdown, global pandemic, Covid etc) so the opportunity to see a European Roller - a showy one at that! Just over an hours drive away into Suffolk was too good an opportunity to miss.

Straight from work Thursday evening, up the M11, across the A11 towards Icklingham and I was soon standing on the side of the road over looking a sheep field - It could have been any field in east Anglia really. But there, on the telegraph wires stretching across the field was the unmistakable azure blue of a Roller - just imagine being the finder? They (as we all do) must have checked hundreds, if not thousands of birds perched on telegraph wires over the years for it to be just another Starling or Pigeon! So I can only imagine their delight and amazement to see this Southern European wanderer looking back at them - what a rush that must have been.

I was probably on site for about an hour, watching the bird mostly perched, static on the wires with the occasional short flight, as it dropped to the ground to collect what looked like rather large earthworms before returning to the telegraph wires. As twitching goes (and I don't do much anymore) I've become much more selective in which birds I would like to go and see, gone are the days of pursuing UK ticks and spending hours in a car just for a distant dot on the horizon. I'd much rather see fewer rare birds but the one's I do (hopefully) see, I see well!

A hugely enjoyable little twitch, with a great subject and excellent views, plus it was good to briefly catch-up with a few familiar faces as well - That's my kind off twitching! 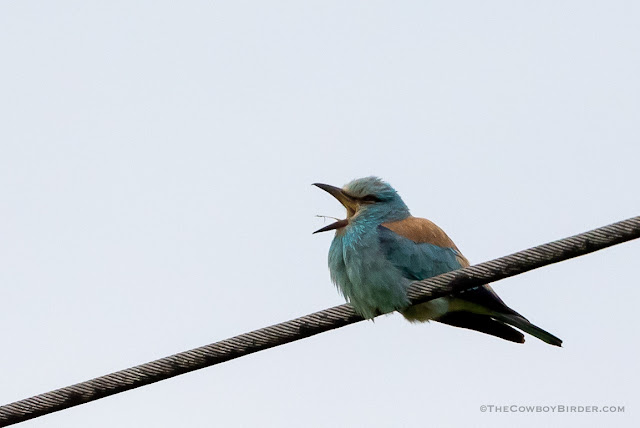 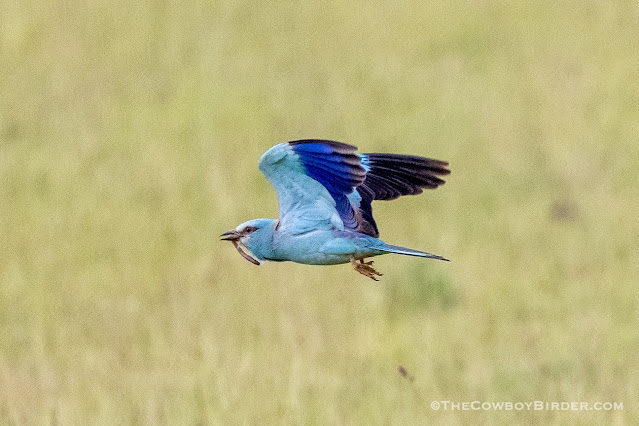 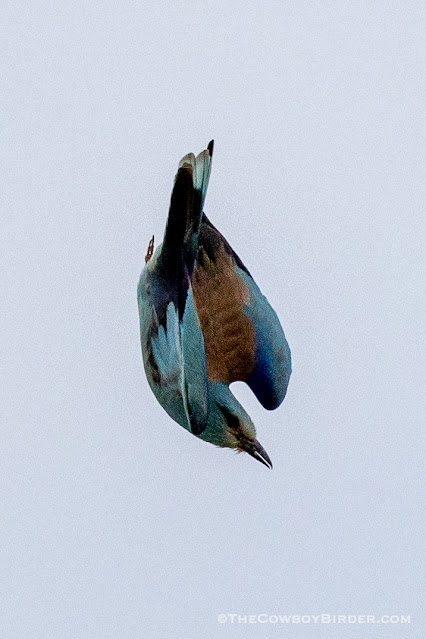 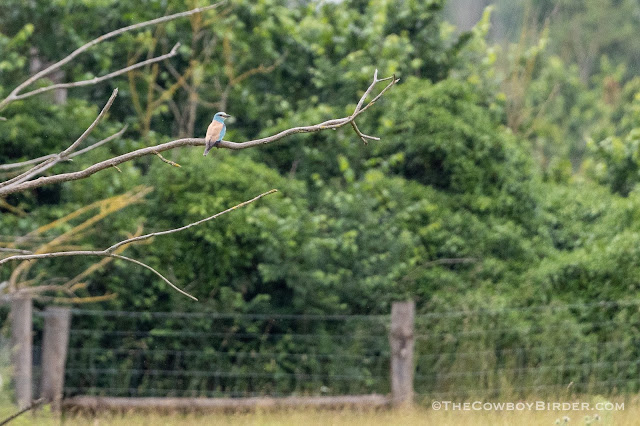 Email ThisBlogThis!Share to TwitterShare to FacebookShare to Pinterest
Labels: twitching

Black-necked Grebe in the Rain

More rain today and I’m starting to get a little bit peeved, my waterproofs need replacing & my walking boots are leaking...but Hey! The Black-necked Grebe on Alexandra Lake continues to show well on the patch so not a total washout. However, this mornings jaunt around Wanstead already had that June feeling about it and unless we get a late overshoot migrant of note, I’ll be dusting off the moth-trap & enjoying a few weekend lie ins until August.

Here’s a little bit of early morning footage of the summer plumage Black-necked Grebe in the rain with a Canada Goose soundtrack!